Learn more
Size750mL Proof91 (45.5% ABV) *Please note that the ABV of this bottle may vary
This gift set contains Widow Jane 10 Year Old Straight Bourbon and Oak & Apple Wood Aged Rye, each in a 375ml bottle. It's the perfect way to delve into their lineup and the whiskey that's proofed with mineral water from the legendary Rosendale Mines of New York.
Notify me when this product is back in stock. 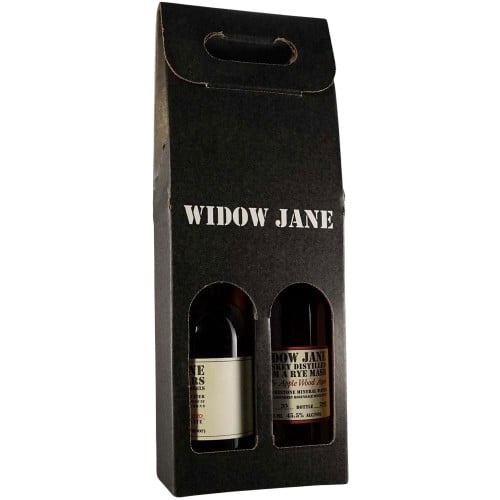 When the Widow Jane team set out to produce their own whiskey they wanted to offer something that was flavor-forward, bold, and rich with character, but most importantly had a taste of New York. All Widow Jane whiskeys are proofed with pure limestone water from the legendary Rosendale Mines of NY, just 100 miles north of their home in Red Hook, Brooklyn. It was limestone from this mine that was used to build the foundation of some of New York’s greatest structures: the gargantuan caissons of the Brooklyn Bridge, the Empire State Building, and the 27,000-ton pedestal to the Statue of Liberty.

This self-renewing source of water is naturally filtered through limestone and collects in the massive underground caverns. Comprised of an unusually high mineral content that enhances the natural flavors in Widow Jane spirits, this water is their fingerprint and a signature ingredient. And the legend surrounding these mines is what gives Widow Jane whiskey its name. The result is some of the finest aged Bourbon you will find, and a tasting experience complete with beautiful aromas, a smooth and creamy mouthfeel, and an ultra-long finish. Both urban & urbane, Widow Jane is New York’s very own. The signature whiskey of the world’s most magnificent and maddening metropolis.

Reviving the lost art of marrying the finest whiskeys, Widow Jane 10 Year Old Straight Bourbon is their signature bourbon. Hand-assembled in Brooklyn using the richest & rarest straight bourbons from Kentucky, Tennessee, and Indiana, only ever in 5 barrel batches, non-chill filtered and proofed with their own mineral water from the legendary Rosendale Mines of New York, this expression has garnered several of the most prestigious awards. Widow Jane is all about high-intensity, flavorful and well-aged whiskeys cut with hard, sweet limestone-filtered water that’s known to make great whisk(e)y, from Kentucky to Scotland. Add New York attitude and non-chill filtration to that and you get a whiskey that’s unadulterated and robust in mouthfeel.

The Oak & Apple Wood Aged Rye is an American Oak Rye aged in a once-used 10-year bourbon barrel. Fresh cut Applewood Staves were placed alongside the oak to yield a soothing and fruity rye compared to the more traditional spiced rye. This whiskey delivers a bold flavor balanced with genuine, bright apple notes and a subtle sweetness. Distilled on-site, it is New York's very own — a signature whiskey of the world's most magnificent and maddening metropolis.

This gift set contains both of these expressions, each in a 375ml bottle: the 10 Year Old Straight Bourbon and the Oak & Apple Wood Aged Rye. It's a perfect way to delve into Widow Jane's delicious offerings and learn about how the fabled mineral water from the Rosendale mines affects the spirit.

10 Year Old Straight Bourbon: The nose opens with aromas of butter, cream, and toffee. The palate has honey with touches of cherry wood, culminating in a finish with charred oak, orange peel, and spice notes.