Learn more
Size750mL Proof80 (40% ABV) *Please note that the ABV of this bottle may vary
A winner of the Silver Medal at the 2012 San Francisco World Spirits Competition, this whiskey is made from local spelt, corn, and wheat, and aged for just 18 minutes!
Notify me when this product is back in stock. 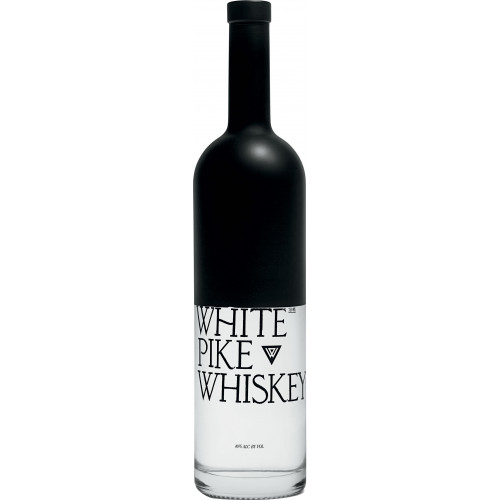 Surrounded by the grapevines of nearly 100 different wineries, Finger Lakes Distilling sits high above Seneca Lake in upstate New York's wine country. The architecture of the 5,000 square foot distillery — complete with a 15-foot-tall canoe-shaped chandelier and made using reclaimed lumber — was inspired by some of Scotland's most prestigious distilleries.

"Over the last few years white whiskeys, moonshines and white dogs have started to proliferate the market," says Steven Ljubicic, the brand ambassador of White Pike Whiskey. "With White Pike, we set out to make a white whiskey that mixes in ways brown whiskeys won't, without sacrificing anything when drinking neat, which is where some white whiskeys struggle."

To make White Pike Whiskey, Thomas McKenzie, the co-owner and master distiller of Finger Lakes Distilling, uses a mash comprised of 59% corn, 28% organic spelt, and 13% malted wheat sourced from local farmers in and around upstate New York. The mash is then fermented for three days before being distilled inside McKenzie's 350-gallon, two-ton Holstein copper-pot still (equipped with a rectification column) imported from Germany. Following distillation, the whiskey is poured into casks for a very brief nap. The folks at White Pike are fond of joking that not a single ounce of White Pike Whiskey ever spends more than "18 minutes in prison,"referring to the 18 minutes White Pike is aged.

The brief rest smooths out the whiskey, which has a rich, buttery corn taste and mouthfeel, with a mature and clean finish.

White Pike Whiskey was crafted to be sipped neat or on ice, or to be a base in any number of cocktails; basically however you want to drink it.

Pick up your white whiskey today!

Smooth, with a rich, buttery corn taste and mouthfeel, with a mature and clean finish.