Caskers Rewards members earn up to 2 store points back when buying this bottle.
Size375mL Proof104 (52% ABV)
A traditional type of Irish moonshine, this poitín won the Bronze Medal at the 2012 San Francisco World Spirits Competition and the Gold Medal at the 2012 American Distilling Institute Competition.
Notify me when this product is back in stock. 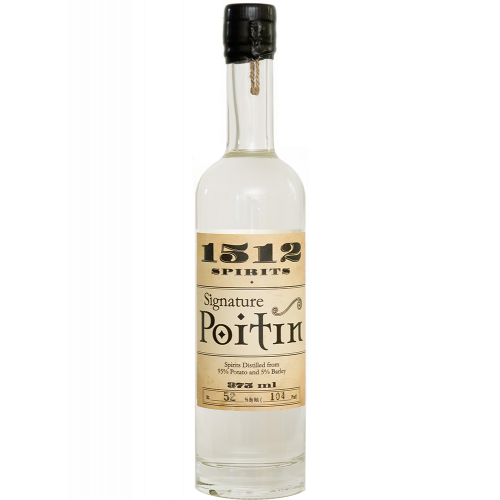 Traditionally distilled from potatoes or malted barley, poitín (pronounced po-cheen) is a type of Irish moonshine that has been distilled in Ireland for centuries. In 1661, the British Crown outlawed the distillation of poitín in Ireland — a ban that lasted until 1997 (poitín remains illegal in Northern Ireland). During that time, enterprising Irishman would produce poitín in remote, rural areas, away from the interference of legal authorities. Recipes were handed down generations, and poitín became a symbol of Irish pride and independence.

In Sonoma County, California, Salvatore Cimino — a third-generation distiller and barber by day — inherited a recipe from a close friend and has been making 1512 Spirits Signature Poitín ever since. Made from a mash of 95% potatoes and 5% malted barley, 1512 Spirits Signature Poitín is the only poitín made in the United States and one of the last few poitíns made anywhere in the world.

Cimino begins by hand-processing fresh, California-grown Yukon Gold potatoes and cooking them over a direct flame. Prior to the introduction of bottled gas, Irish bootleggers would cook the potatoes or barley over a turf flame. Since the smoke from the turf flame gave away their position, the bootleggers would wait for windy days (the wind would disperse the smoke) to distill poitín, in order to avoid the wrath of the crown.

After cooking the potatoes, Cimino — who operates the entire 750 square-foot distillery himself — adds hand-milled malted barley and cooks the mash, leaving it to ferment for three to four days. Following fermentation, Cimino distills poitín in a handmade 125-gallon copper-pot still (pota is Gaelic for "pot") twice before bringing it to 104 proof.

Poitín is intense and powerful — the aroma from the potatoes and malted barley fills the room. Unlike any other spirit, poitín is raw and unadulterated. While fermentation and distillation of potato vodkas causes precious oils to be burned off, 1512 Spirits Signature Poitín preserves their flavors and aromas. With notes of oatmeal and green spices, there's a robust, spicy element that provides for a unique flavor profile. While the finish is surprisingly light and sweet, poitín is more likely to wake you up than put you to bed.

1512 Spirits Signature Poitín is high effort and low yield — each batch only produces about 30 gallons of finished product. Master Distiller Salvatore Cimino has allocated only a few bottles of his most recent batch for Caskers members. Each bottle is hand-numbered and hand-wax sealed.

By day, Salvatore (“Sal”) Cimino runs a barbershop at 1512 Pine Street in the Nob Hill neighborhood of San Francisco. A third-generation barber, Cimino also learned the art of distilling from his father, who maintained an improvised wine cellar in the family’s home and taught Sal how to distill the excess grapes into grappa. For many years, Sal’s distilling operation was “clandestine”, with the fruits of his labor being shared only with friends and family — however word quickly spread of his natural gift for distilling, and since then Sal has opened up a full-time operation in Sonoma County, very well becoming the world’s only barber by day and master distiller by night.
Explore all 1512 Spirits bottles >>

Strong nose of potatoes and starches, with a floral hint reminiscent of cucumber and green spices. Robust, raw, and unadulterated flavor. Starchy notes of potatoes and oatmeal lightly coat your mouth. Gives way to a lighter flavor mid-palate, with notes of allspice and a chewy mouthfeel. Finish is light and sweet.