Size750mL Proof85 (42.5% ABV)
Distilled twice in a hybrid pot still, this moonshine is infused with pumpkin, cinnamon, nutmeg and ginger.
Notify me when this product is back in stock. 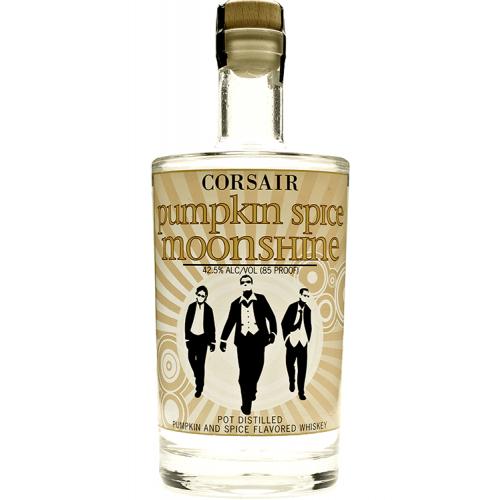 "I'm an avid whiskey lover," says Darek Bell, master distiller at Corsair Artisan Distillery in Kentucky, "but I do think whiskey could be better. Different. More interesting. More imaginative." Bell — a graduate of the Bruichladdich Distilling Academy in Islay, Scotland — is a notoriously experimental distiller. "When you look at the palette the distilling world uses, the paints typically consist of corn, rye, wheat and malted barley,"explains Bell, a former homebrewer. "Contrast that to craft brewing, where brewers use dozens of malts and adjuncts. With distilling, I think like a brewer: the better the ingredients you put into the whiskey, the better it will be."Since opening its doors in 2009, Corsair Artisan Distillery has received numerous accolades and awards, including being named the 2013 Craft Distillery of the Year and 2013 Innovator of the Year by Whisky Magazine.

Inspired by pumpkin ales, Bell creates Corsair Pumpkin Spice Moonshine by distilling malted barley and wheat in order to make a sweet malt whiskey. His 50-gallon, four-plate hybrid pot still, which was custom-made by Vendome Copper in Louisville, Kentucky, gives him unique flexibility and control over the distillation process. After the grains have been distilled, Bell adds fresh ginger, cloves, allspice, ground cinnamon and five pounds of fresh pumpkin into the still's vapor basket, and then distills the whiskey a second time. As a result, the whiskey is infused with a unique taste — flavors of pie crust and malt are followed by the full, sweet notes of cinnamon and pumpkin.

Corsair's small operation has no mechanized components — each bottle is filled, labeled and then boxed by hand. "We make less in a year than a big distillery spills in a day," says Clay Smith, Corsair's distillery manager.

Perfect for the fall, try a bottle of small-batch Pumpkin Moonshine today!

Savory and sweet. Aroma of cinnamon and nutty brown butter. Notes of malt and whiskey initially quickly give way to pumpkin and nutmeg. Long finish.