Learn more
Size750mL Proof80 (40% ABV) *Please note that the ABV of this bottle may vary
Made from organic winter wheat and malted barley, this white whisky is finished in stainless steel casks and uncharred Minnesota oak barrels.
Notify me when this product is back in stock.

This product is available in: OK Unfortunately, we can't ship to PO Boxes and APO addresses. 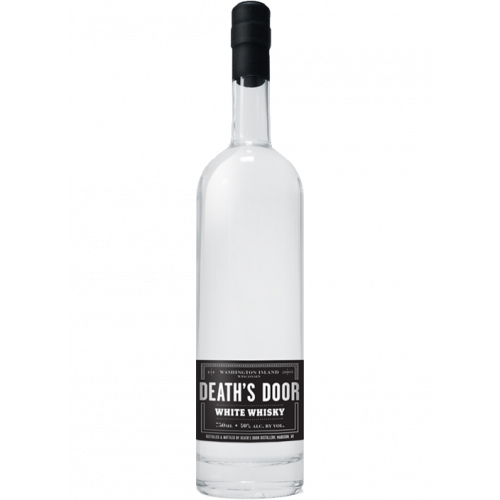 Death's Door White Whisky is made from a mash of 80% organic, hard red winter wheat sourced from Washington Island and 20% organic malted barley sourced from Chilton, Wisconsin. After the ingredients are brought to Death's Door Distillery in Middleton, Wisconsin, John Jeffrey, Death Door's master distiller, double-ferments and double-distills the whisky by hand.

Jeffrey, a graduate of the Artisan Spirits Distilling Program, received his Masters of Science Degree in Food Science from Michigan State University where his research focused on barrel aging dynamics, fermentation optimization, yeast byproducts and other fermentation and distillation processes.

After double-distilling the white whisky inside a 90-gallon copper-pot still and giving the spent mash to local hog and dairy farms to be used as feed, Jeffrey rests the whisky inside stainless steel casks before finishing it in uncharred Minnesota oak barrels. The oak barrels round out the notes of light vanilla, wheat, cereal and malt in the whisky. In addition, they give the whisky an aroma of tequila and citrus. Still, it's the mashbill of hard, red winter wheat that gives Death's Door White Whisky its unique flavor profile. After finishing the whisky in the oak barrels, Jeffrey fills and labels each bottle by hand.

Avoid the fate of the Death's Door by picking up a bottle today!