Size750mL Proof124 (62% ABV)
This Black Prince expression was named Best in Show for whiskey at the 2017 San Francisco World Spirits Competition.
Notify me when this product is back in stock. 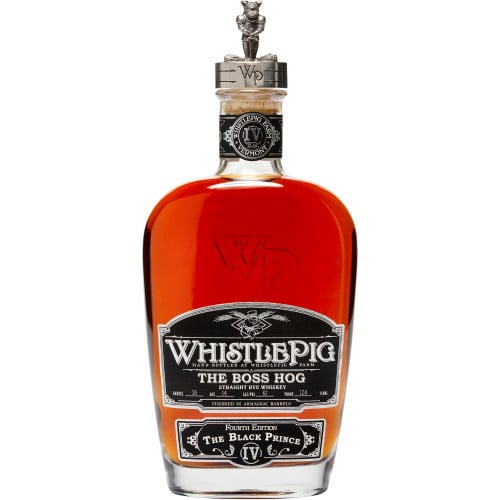 About WhistlePig The Boss Hog IVth Edition: "The Black Prince"

WhistlePig is one of the only American whiskey businesses to conduct every step of product onsite, from the harvesting of the rye fields to the distilling, barreling aging and bottling. They operate on a sustainable closed loop system, growing its own rye (which needs very little fertilization, and the residual gets recycled for pig feed) on its own farm. They even source their own oak tree logs for their barrels from the premises. WhistlePig is the ultimate grain-to-glass operation, which allows meticulous attention to detail every step of the whiskey making process.

This is the fourth edition of the 10-year-old brand’s signature Boss Hog collection. This whiskey is the first rye ever to be finished in casks formerly used to age the French brandy Armagnac. Aged for 14 years, this straight rye is bottled at barrel strength.

This bold rye is characterized by its smoothness and depth of character. This balanced, highly nuanced Black Prince expression was named Best in Show for whiskey at the blind tasting held during the 2017 San Francisco World Spirits Competition.

Armagnac-accented oak contributes to the Black Prince being redolent with notes of apricot, fig, and plum on the nose, complemented by toasted almonds, baked apple, and allspice. Predominant on the palate are apricot, clove, and cinnamon, with hints of citrus and black tea. The finish, which seems to linger like the longing for a lost love, comforts with traces of toasted marshmallows, burnt sugar, and dried fruit.