Learn more
Size750mL Proof86 (43% ABV) *Please note that the ABV of this bottle may vary
"Crop No. 001 marries the untamed contours and boldness of our estate whiskey, which only youth can provide, with the richness of our best five to six year ryes, topped off with the splendor of our 12 Year “Old World” whiskey." - WhistlePig
Notify me when this product is back in stock. 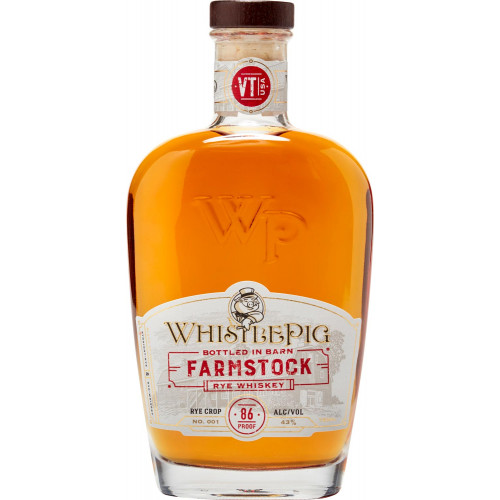 About WhistlePig FarmStock Rye Crop No. 001

WhistlePig is one of the only American whiskey businesses to conduct every step of product on site, from the harvesting of the rye fields to the distilling, barreling aging, and bottling. They operate on a sustainable closed loop system, growing their own rye (which needs very little fertilization and the residual gets recycled for pig feed) on their own farm. They even source their own oak tree logs for their barrels from the premises. WhistlePig is the ultimate grain-to-glass operation, which allows meticulous attention to detail every step of the whiskey making process

WhistlePig aims to restore America’s original spirit as the signature drink of the nation. Vermont happens to be home to rye production since colonial days. And one of the many goals of the distillery is to ultimately produce a Vermont Estate whiskey.

Their Crop No. 001 expression is a marriage of untamed contours and bold flavors of their youthful Estate Whiskey, with the rich flavors of their best five to six year ryes. The blend is topped off with their 12 Year “Old World” whiskey. With notes of oak, vanilla baking spices, and citrus, WhistlePig FarmStock Rye Crop No. 001 is quite a step in the visionary farm-to-bottle whiskey industry in the U.S.

Pick up a bottle of this special grain-to-glass whiskey today!

Palate: Caramel,cinnamon, and baking spices prevail with hints of citrus and stonefruit.