Size750mL Proof90 (45% ABV)
Using the Scottish model of whisky-making, Dorado is made from 100% barley, malted and smoked over a velvet mesquite fire.
Notify me when this product is back in stock. 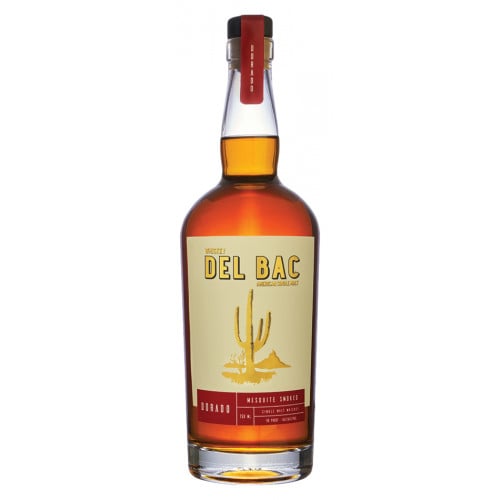 Del Bac was conceived while Stephen was drinking Scotch and barbecuing with mesquite scraps from his custom furniture company. The idea was born to malt barley over mesquite instead of peat. The result was a signature whiskey embodying the spirit of the American Southwest terroir. The unique whiskey was initially distilled using a 5-gallon alembic pot-still from Portugal. While perfecting the production process he learned how to malt barley, initially using a 6-row cattle-feed barley sourced from nearby Coolidge, AZ, later sourcing a 2-row malting barley from Southern Colorado.

Whiskey Del Bac Dorado is a single malt whiskey with the true character of the American Southwest. Inspired by the Scottish model of whisky-making, Dorado is handcrafted from 100% barley that is malted and smoked over a velvet mesquite fire, mashed, fermented, copper pot distilled, aged and bottled on site. Dorado has a nose of tobacco and chocolate, giving way to campfire embers, and finishing with soft tannins and sweet toffee on the palate.

A nose of tobacco and chocolate gives way to campfire embers, finishing with soft tannins and sweet toffee on the palate.