Learn more
Size750mL Proof84 (42% ABV) *Please note that the ABV of this bottle may vary
Made by dedicated artisans who appreciate flavorful spirits, this is a young, bold whiskey deserving of its name.
Notify me when this product is back in stock. 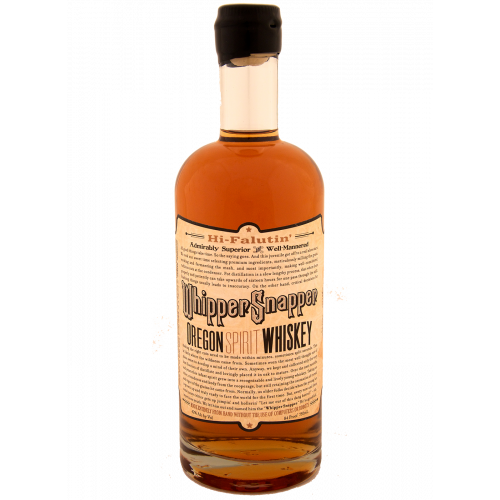 "Whippersnapper"has many definitions, but we prefer the one meaning a young person who, lacking in respect for his elders, has the ambition to match his hubris. Thus we have WhipperSnapper Oregon Spirit Whiskey: a young, pot-distilled, hand-crafted whiskey with gumption.  Although its mashbill is most similar to bourbon, it's heavy on malted barley and aromatically, more similar to non-peated Scotch or Irish whiskey. And, despite its age, its brash and outstanding.

Using a combination of malted barley from the Pacific Northwest and unmalted barley from the Willamette Valley in Oregon, Tad Seestedt, Ransom Spirits' master distiller, grounds, mashes, ferments and distills the whiskey on location at his distillery in Sheridan, Oregon.  Then, he blends it with a secret Kentucky corn whiskey, which has been redistilled in Seestedt's copper amblemic pot for up to sixteen hours.

The resulting alchemy is aged in French pinot noir barrels, white American oak casks, and used American bourbon barrels for approximately one year.  For each bottling, Seestedt selects eight barrels by hand to make the best possible WhipperSnapper before hand-bottling, hand-labeling and hand-waxing each bottle.

A long distillation in a small copper pot, together with a discriminating cut at the condenser, makes WhipperSnapper a complex yet discriminating whiskey, deserving of its name.