Size750mL Proof101 (50.5% ABV)
Crafted with a mash bill of 70% corn, 21% rye, and 9% malted barley, this bourbon is matured for 2 to 4 years in American oak casks. The 101-proof whiskey features a classic and deliciously balanced bourbon profile. 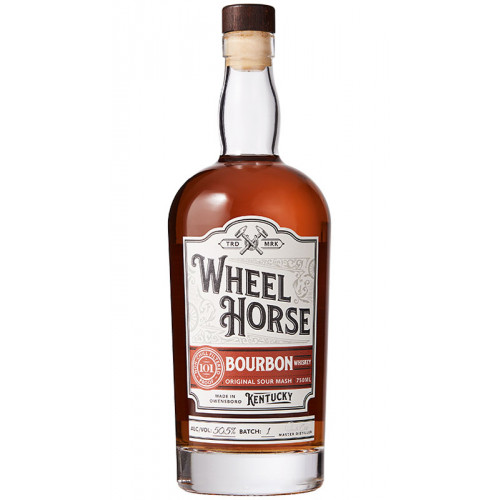 The historic Owensboro Distilling Company stands in Owensboro, Kentucky. Situated on the westernmost part of the Kentucky Bourbon Trail, the site has some 130 years of rich distilling history. Built in 1885, the Green River Distillery was the first to operate on the grounds, making it the first distillery in the city and only the 10th permitted in Kentucky. The distillery had a rocky past, changing hands several times and laying dormant for several decades.

After coming close to being destroyed, it was rebuilt in 2014 under new ownership. Ron Call was brought in to help evolve the project with his 4 decades of experience working as Master Distiller at Jim Beam and Florida Caribbean Distillers. After production resumed in 2016, he passed the torch to his son Jacob Call. The 3rd-generation distiller oversees the crafting of the sour-mash whiskey in copper stills, as well as the aging in new American oak casks.

Wheel Horse Straight Bourbon is a small-batch sour mash whiskey that is crafted with a mash bill of 70% corn, 21% rye, and 9% malted barley. It then spends between 2 and 4 years in 53-gallon American oak casks (#4 char). Bottled non-chill filtered at 101 proof, it's an exceptionally well-balanced and surprisingly mature whiskey with a classic bourbon profile.

Get your bottle of this classic bourbon today!

The nose is fruity with orange zest, caramel, and oak aromas. The creamy palate has a pleasant sweetness with caramel, vanilla, oak, and hints of rye spice, culminating in an oaky, sweet, and buttery finish with baking spice.