Size750mL Proof90 (45% ABV)
Building on the super-solid foundation of Westward's American Single Malt, this expression takes that whiskey for a round of finishing in wine casks that used to hold Pinot Noir from Willamette Valley, adding a fruity layer to the spirit. 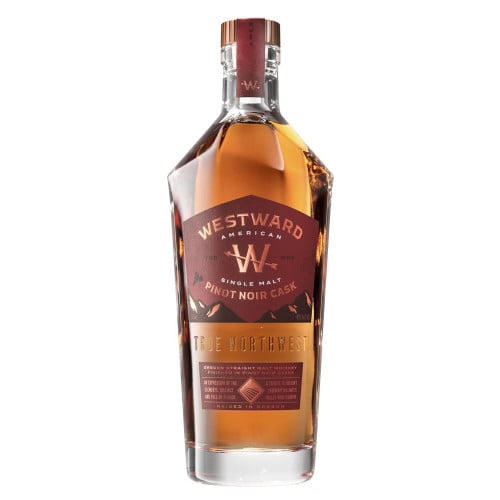 Westward strives for perfection through Minimalist Distilling, a philosophy pioneered by their founders that begins by selecting the highest quality ingredients. Their purposefully inefficient production process brings out the flavor of the grain and other natural ingredients. Every step is meant to express flavor; never to strip away or mask impurities.

Taking their American Single Malt as the base, this expression builds on that solid foundation while paying tribute to Oregon's Willamette Valley. It's Pinot Noir that thrives the most in this particular wine country. The single malt is finished for up to 2 years in French oak wine casks from Willamette Valley wine producers, resulting in a fruity spirit that still lets the whiskey's robust character shine through.

The nose opens with fruity plum and apricot aromas, followed by leather and chocolate ganache. The palate has apple, plantain, and nutmeg notes, finishing with rich dried fruit notes.