Learn more
Size750mL Proof94.7 (47.35% ABV) *Please note that the ABV of this bottle may vary
Made in Tennessee and aged in Kentucky, this 7-year-old expression is bottled at 94.7 proof. It pays tribute to Wattie Boone, a pioneering distiller that is believed to be one of the candidates for the inventor of bourbon.
Notify me when this product is back in stock. 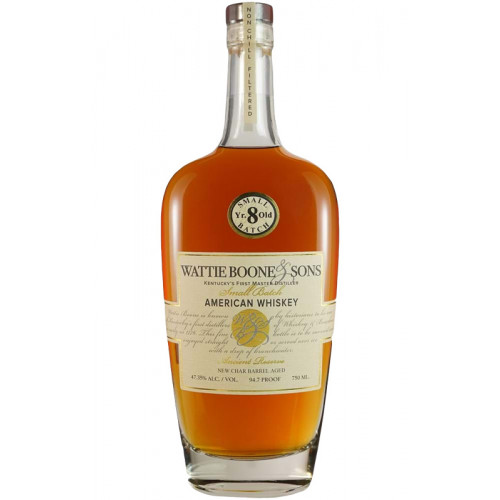 Historians say that pioneer distiller Wattie Boone was the first documented person to produce bourbon in Kentucky in 1776. He erected the first distillery in Knob Creek, even employing the son of Abraham Lincoln ― according to local legend. Boone is one of a handful of persons most likely to have invented bourbon. He crafted his spirit along the Beechfork, where Preservation Distillery stands.

Preservation Distillery stands among the rolling hills of Kentucky Bluegrass Country. The farmhouse distillery sits on 40 acres of land, its bourbon roots dating back 7 decades, when they started trading old-world bourbon. More recently, they built their own micro-batch distilling facility. The whiskey is pot-distilled in small 1-3 barrel batches and is home to Wattie Boone & Sons, Very Olde St. Nick, and Cowboy Little Barrel brands.

Wattie Boone & Sons pays tribute to the pioneering distiller in the form of a single-barrel whiskey that is made in Tennessee and aged in Kentucky for 7 years before being bottled at 94.7 proof. You can expect notes of caramel, corn, citrus zest, oak, and a nice balance of sweetness and spice.

The nose has aromas of corn, caramel, lemon zest, vanilla, and hints of spice. The notes are nicely mirrored on the palate with a gentle sweetness and additional hints of oak & banana. The finish is long with a touch of oak, spice, and cocoa.