Learn more
Size750mL Proof100 (50% ABV) *Please note that the ABV of this bottle may vary
Crafted with 100% Irish barley from the farm of Phil O’Brien in Sheestown, this is a beautiful terroir expression of the well-drained limestone lowland soil from around Kilkenny.
Notify me when this product is back in stock. 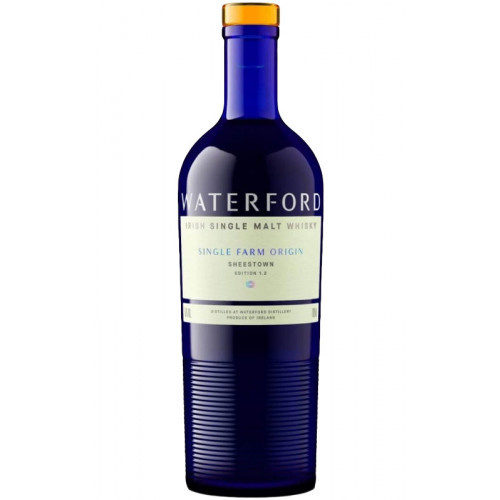 In Reynier's terroir-centered philosophy, barley is king. The most important is the location and manner of growing and harvesting. Waterford has contracts with 46 local barley farmers that cultivate the grass in 19 distinct soil types, and each farmer's barley is distilled separately, capturing the essence of the land it was grown on. Each week a single farm's barley is distilled, with total transparency and traceability―you can check the current and past ones on their regularly updated website. Each bottle comes with a TÉIREOIR code you can enter into the website to get access to a wealth of content related to the release.

The Sheestown Edition 1.2 is the second release of the highly successful 1.1 edition and features Irish barley from Sheestown, a high-quality terroir that sits just outside the historic town of Kilkenny. The first crop distillation was grown on undulated, well-drained lowland soil, predominantly derived from limestone, by Phil O’Brien, father of one of the distillery workers. Like the previous editions, this spirit has also been matured in French wine casks, first-fill bourbon barrels, virgin oak barrels, and Vin Doux Naturel (VDN) casks, in different ratios.

The O'Brien farm nose is fresh and fruity, with peaches, cooked pears, cinnamon, and oranges. The flavor is well-rounded with barley, vanilla, creamy biscuits, with subtle fruity notes. The finish is long, with grapefruit peel, oak spice, cinnamon, and butterscotch.