Learn more
Size750mL Proof86 (43% ABV) *Please note that the ABV of this bottle may vary
This blended Scotch consists of more than 50% premium single malts aged between 16 and 18 years, while the rest is some of the finest aged grain whisky that the master blenders select from some of Scotland’s most reputable single malt distilleries.
Notify me when this product is back in stock. 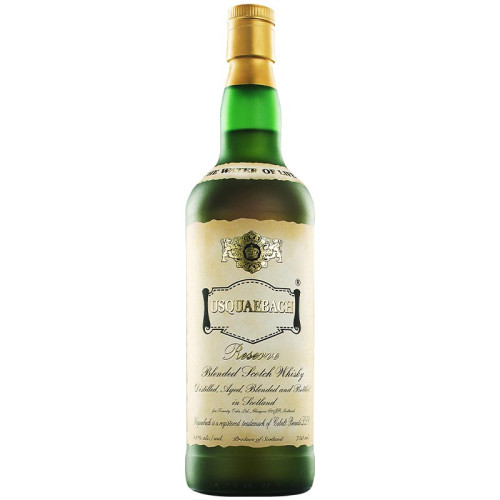 Usquaebach (Scottish Gaelic for "Water of Life") was established in 1877, but the "Old Rare" recipe dates back to the 1700s. Crafted by a family-owned house, the whisky is made under the watchful eye of their master blenders, who search high and low for the very best malts and grains from Scotland’s most reputable single malt distilleries. Usquaebach Reserve Blended Scotch Whisky contains more than 50% premium single malts aged between 16 and 18 years, the rest is some of the finest aged grain whisky. Bottled at 86 proof, it's a flavorful and balanced expression with notes of cookies, whole grain bread, honey, baked pear, apple, orange, clove, and soft peat. The whisky won a Gold Medal at the San Francisco World Spirits Competition in 2016.

Get your bottle of this balanced and accessible Scotch today!

The nose of this yellow-gold whisky is creamy with cookie, whole grain bread, honey, and baked pear aromas. Look for gentle heat, floral, honey, and apple notes on the palate. The finish is smooth with a touch of clove and orange zest.