This product is available in: CA, MN, NE, NH, ND Unfortunately, we can't ship to PO Boxes and APO addresses.

Size750mL Proof86 (43% ABV) each
Crafted by a master distiller with over five decades of experience, these whiskies were finished in unique casks that were formerly used to mature wine.
Notify me when this product is back in stock.

This product is available in: CA, MN, NE, NH, ND Unfortunately, we can't ship to PO Boxes and APO addresses. 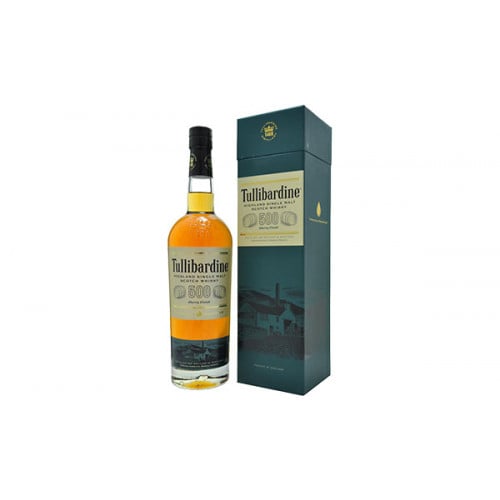 Tullibardine Single Malt Scotch Whisky is made exclusively from locally-sourced malted barley. Once the grains arrive at the distillery, they are milled and mashed before being fermented in the distillery's washbacks. Following fermentation, the wash was distilled by John Black, Tullibardine's longtime master distiller, through the distillery's copper-pot stills (the stills were installed in 1974). Tullibardine legendary master distiller Black, who was born in 1942 at the Cardhu Distillery, has spent over five decades in the Scotch whisky industry until he sadly deceased recently in 2013.

Tullibardine Highland Single Malt 500 Sherry Finish Scotch Whisky is also aged in American oak casks that were previously used to mature bourbon. After its initial beauty rest, it is finished for one year in 500-liter sherry butts. As a result, the whisky has a reddish-honey hue, along with an aroma of brown sugar, caramel apples and spices. The aroma gives way to notes of stewed fruit, cinnamon, dates and allspice on the palate, and finishes with hints of milk chocolate, orange zest and cinnamon.

Each Tullibardine Single Malt Scotch Whisky represents a unique spirit, distilled in time-honored tradition and finished with a modern twist.