Size750mL Proof112.3 (56.15% ABV) - may vary
This barrel-strength rye from an award-winning Kansas craft distillery is made from a mashbill of 100% local rye grains.
Notify me when this product is back in stock. 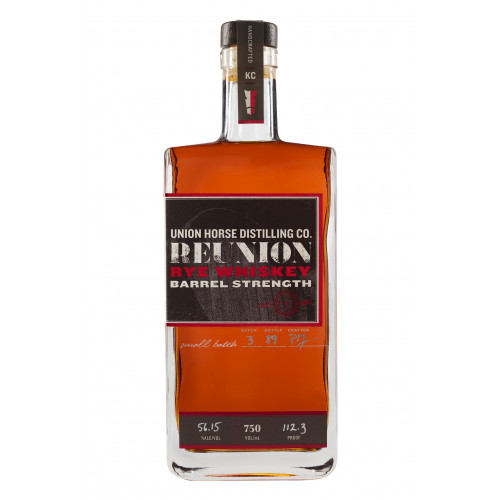 "The name Dark Horse came to us because we knew we had a long road ahead of us when we started the distillery," says Damien Garcia, Dark Horse Distillery's Director of Sales. "We saw tons of liquor brands being launched and lining the shelves of stores, bars and restaurants and knew that it was going to be an uphill battle to get people to know that our brand really stood for quality. The term "Dark Horse" spoke to us as that horse that started in the back of the pack, but came on strong. That's what we think our brand does, too."

Union Horse Barrel Strength Reunion Rye Whiskey is made from a mash of 100% rye grains that are sourced from local farms in the American Midwest. The rye is milled and mashed before being fermented for five to six days. "We have ten fermenters, so we can have ten fermentations going at once," says Garcia. Once fermentation is complete, the rye is distilled through the copper-pot still.

Following distillation, Union Horse Barrel Strength Reunion Rye Whiskey is matured in new, American oak casks. "The key to aging whiskey is actually the wood and the changes in temperature," says Garcia. "In here, the temperature gets as low as 50 degrees and as hot as 100 degrees," he says of the barrel-house. "That fluctuation of temperature helps the wood expand and contract. What that does is force the whiskey inside to interact with the wood." Once the rye has matured for up two years, special barrels are then selected by Dark Horse’s Artisan Distillers to be bottled by hand, uncut and unfiltered, at 113.2 proof, creating Dark Horse Barrel Strength Reunion Rye.

Union Horse Barrel Strength Reunion Rye Whiskey has a rich aroma of caramel, maple syrup and breakfast cereal. Notes of citrus, light vanilla and toffee with a tinge of mint and pepper spice initially dominate the palate, and give way to bold notes of rye bread, clove and melted butter. The finish is smooth and defined, with touches of spicy rye, worn leather and black pepper.

A limited number of these fingerlicking barrel-strength rye bottles are available through Caskers.

Rich aroma of caramel, maple syrup and breakfast cereal. Notes of cinnamon and ginger initially dominate the palate, and give way to bold notes of rye bread, clove and melted butter. Finish is smooth and defined, with touches of spicy rye, worn leather and black pepper.