Size750mL Proof92 (46% ABV)
This stunning Hyde 6 Year-Old No. 3 The Áras Cask, is distilled three times in a Coffey still, from corn and barley grain.
Notify me when this product is back in stock. 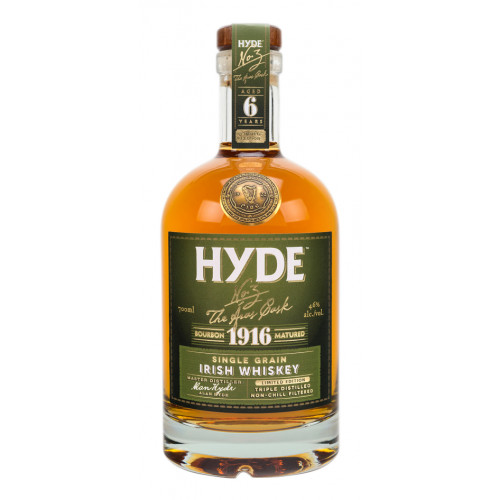 About Hyde No.3 The Aras Cask Irish Whiskey

Hibernia Distillers was founded in 2014 by Conor and Alan Hyde in Skibbereen, Ireland. The brothers reached meteoric success with their traditional single malt and single grain Irish whiskeys earning themselves a strong reputation for producing high quality, award-winning Irish spirit.

Hyde whiskey is crafted in small batches using a traditional copper pot still. This Hyde 6 Year-Old No. 3 The Áras Cask, is produced from corn and barley grain, distilled three times in a Coffey still before being rested for six years in 1st fill ex-Bourbon barrels. The Bourbon notes are prominent on the nose and palate, rich and complex beyond its years.

Caramel and American oak on the nose with strong notes of clove, cinnamon, toffee and coffee. The palate has flavors of nougat, vanilla, spice, pepper and chili. The finish is soft and rich with notes of caramel, ginger, barley and pepper.