Size750mL Proof86 (43% ABV)
After spending 4 years in sherry casks, this Irish single malt is transferred into barrels that were charred using peat from the Glengarriff Forest in Southern Ireland. The unique process involves a hand-built device that was built by West Cork Distillers.
Notify me when this product is back in stock. 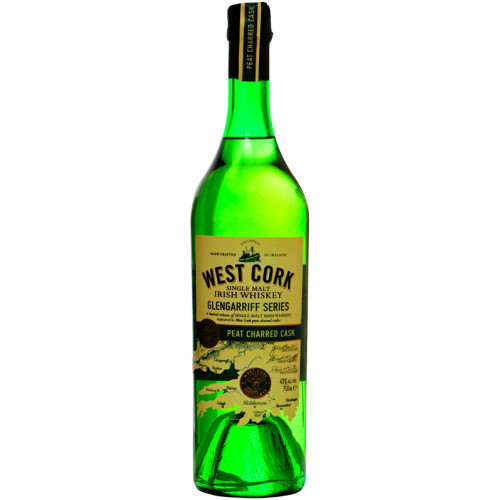 Distilled, matured, and bottled on-site, West Cork offers a diverse lineup of Irish whiskey that is triple-distilled, non-chill filtered, and crafted using local ingredients. West Cork Glengarriff Peat Charred Single Malt Irish Whiskey is distilled with Irish barley, then aged for 4 years in sherry casks. Finally, it's finished in casks that have been charred with peat from the Glengarriff Forest in Southern Ireland. The unique charring process employs a hand-made device that was built by West Cork Distillers with the help of a local blacksmith with generations of smithing experience.

Grab a bottle of this unique Irish whiskey today!

The nose is gently sweet with dried fruit, a touch of baking spices, and hints of peat. On the sweet palate, you'll find malt, orchard fruit, and a prominent smokiness that lingers through the finish.