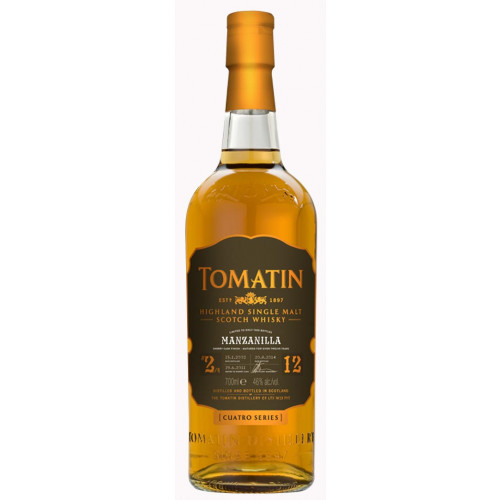 Tomatin 12-Year-Old Single Malt Scotch Whisky is made from plump, Scottish barley. After the barley is harvested, it is mashed and fermented before being distilled twice through Tomatin's copper-pot stills. The stills have a round, flat shape that gives the whisky a rounder and sweeter flavor profile, notes Douglas Campbell, Tomatin's master distiller. Campbell, who began working at the distillery in 1961, joined Tomatin as an accountant, doing clerical work. "After that, the managing director, John McDonald, took me under his wing and gave me the chance to work in different parts of the distillery. I did mashing for three or four years, distilling for a couple of years, worked in the warehouses. Eventually, I was one of the charge hands getting casks ready for dispatch."

Campbell has over fifty years of experience at Tomatin Distillery. "My father worked here as a cooper, my wife worked here for 10 years as secretary for the managing director, and my son works here now in the warehouse. I was born in Tomatin, I belong to Tomatin.” Campbell’s expertise is the foundation of Tomatin Whiskies. The distillery has produced several beautiful whiskies, full of character, including their Cuatro range, an exploratory series of biologically and oxidatively sherry aged cask finishes. A simple yet original idea; exploring Sherry in its different states, the intricate depths of its character.

To produce these whiskies, Tomatin crafts a single batch of whisky distilled on January 15th, 2002. The batch is matured for nine years in traditional ex-bourbon casks, then transitioned to various first-fill sherry casks for another three years. The range is a tribute to four (Cuatro) different types of Sherry: Manzanilla and Fino— which are two biologically aged sherries, and the more traditionally used Oloroso and sweet Pedro Ximénez Sherries—two oxidative sherries. These whiskies showcase the unique characteristics of both oxidative and biological sherry finishes. This biological sherry cask finished single malt is aged for 12 years in Manzanilla casks. Rather mellow on the nose, this whisky offers sweet hints of fruit on the palate.

Rather neutral and malty on the nose, with notes of cereal, soft spices yellow plums, pear and white grapes. The palate is smooth and fairly sweet, with fruits like grapes, oranges, apples, and hints of lemon cake. A blatant oaky spiciness of white pepper also resides on the palate, supplemented by a hint of salt. The finish is medium long and sweet with notes of baked goods and pepper.