This product is available in: CA, KY Unfortunately, we can't ship to PO Boxes and APO addresses.

Size750mL Proof117.9 (58.95% ABV)
Three Chord is primarily a blending operation, yet they recognize a good cask when they see one. When they came upon a small lot of barrels, they decided to bottle them sans modification. Whiskey Drummer is a 15-year-old bourbon that's bottled non-chill filtered at barrel proof.

This product is available in: CA, KY Unfortunately, we can't ship to PO Boxes and APO addresses. 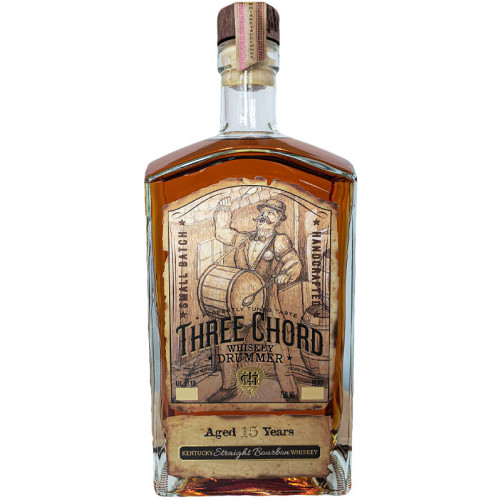 While primarily a blending and finishing operation, Three Chord can recognize very special casks when they see them. When they found a small lot of barrels, they knew that they had to be bottled without modification. Their first limited release expression is Whiskey Drummer, a straight bourbon with a mash bill of 78.5% corn, 12.5% rye, and 9% barley that has spent 15 years in its oak casks. Bottled non-chill filtered at barrel proof, only 2,500 bottles were produced.

Get your bottle of this limited-release 15YO bourbon today!

The aromatic nose has baking spice, campfire, and dark chocolate aromas. The palate is heavy yet balanced with oak, walnut, leather, vanilla, allspice, and a touch of smoke. The finish is long with brown sugar, cinnamon, and cherry.