Size750mL Proof80 (40% ABV)
A tribute to the Irish diaspora, this whiskey is a blend of double distilled malt and grain whiskeys. Matured in ex-bourbon casks, the light, sweet, and fruity expression makes a great sipper and a versatile cocktail base.
Notify me when this product is back in stock. 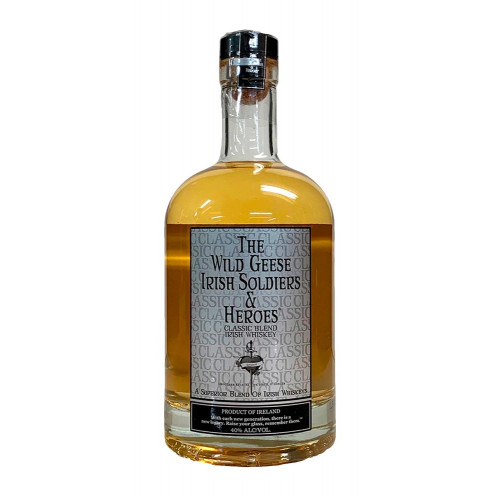 About The Wild Geese The Irish Soldiers & Heroes Classic Blend

Patrick Sarsfield was an Irish soldier known for his role in the 17th century Williamite War in Ireland. As a senior commander of the Jacobite army, he was forced into exile after the Treaty of Limerick. As a part of the treaty, the Jacobite soldiers were allowed to cross to France during this event, later named "The Flight of the Wild Geese". The term "Wild Geese" had since been used when referring to Irish soldiers leaving to serve continental countries, as well as the Irish diaspora in general. The Wild Geese brand pays tribute to the history of Irish immigration.

Several expressions of Irish whiskey, as well as rum, have been released under the Wild Geese banner, garnering numerous awards over the years. The Wild Geese Irish Soldiers & Heroes Classic Blend Irish Whiskey is a blend of malt and grain whiskeys that is double distilled instead of the more common triple distillation seen in Irish whiskey. After being aged in ex-bourbon casks, the whiskey is bottled at 80 proof. The blend of malt and grain as well as the extended double distillation result in a balanced, smooth, and light profile with gentle spice notes that makes the spirit great for sipping as well as mixing. It has scored a "3 Stars". Recommended from Paul Pacult's Spirit Journal, as well as a Bronze Medal at the New York International Spirits Competition, among other awards.

Grab a bottle of this light Irish whiskey today!

It's a light Irish whiskey with a balance of berries, citrus, vanilla, and gentle oak spice aromas on the nose. The palate is equally light with fruit, honey, and oak, culminating in a pleasantly sweet and oaky finish.