Size375mL Proof86 (43% ABV)
This special New Zealand blend is crafted with a unique copper pot distilled “single grain whisky.”
Notify me when this product is back in stock. 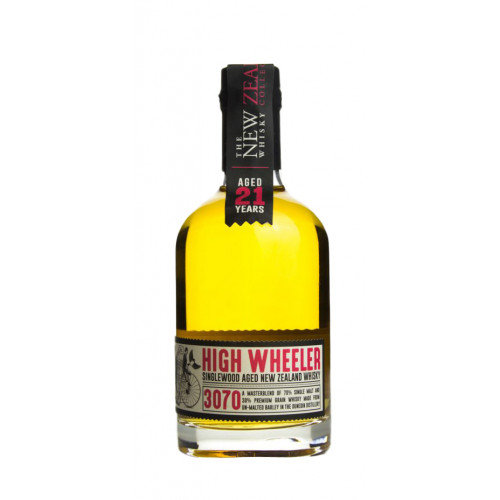 The Wilson’s Dunedin Distillery, also known as Willowbank Distillery, was established in 1974 on the South Island of New Zealand by the Baker family. It was the southerly distillery in the world, producing highly regarded Milford and Lammerlaw Whisky brands.

In 1997 the last whisky distillery in New Zealand was closed down, and hundreds of barrels of cask strength whisky were auctioned off or mothballed. The remaining stock is currently owned by The New Zealand Whisky Company purchased 443 barrels. Produced in what was once the world's southernmost distillery, the rare spirit is now stored inside a seaside warehouse in Oamaru, slowly being released to the public.

High Wheeler is a 21-Year-Old is a blended whisky, with a high malt whisky content. 70% of this spirit is malt the other 30% is single grain whisky. Matured in American ex-bourbon oak barrels for over two decades, this whisky is unique in that its grain whisky was crafted using pot stills, rather than a column still. Bottled at 43% ABV this blend has a good measure of sweet fruity and salty notes.

An elegant balance of baked pear and vanilla crisp on the nose, with gentle floral notes. The palate is full of pear sweetness with a smooth and clean body. The finish is long and warming with chili pepper spice, giving way to a long salty and sweet finish.