Learn more
Size750mL Proof86 (43% ABV) *Please note that the ABV of this bottle may vary
The Macallan Triple Cask Matured 15 is a marriage of fifteen year old single malt aged in American sherry-seasoned casks, European-seasoned sherry butts, and American ex-bourbon barrels. The flavors are richer and deeper with strong notes of orange zest and chocolate creams.
Notify me when this product is back in stock. 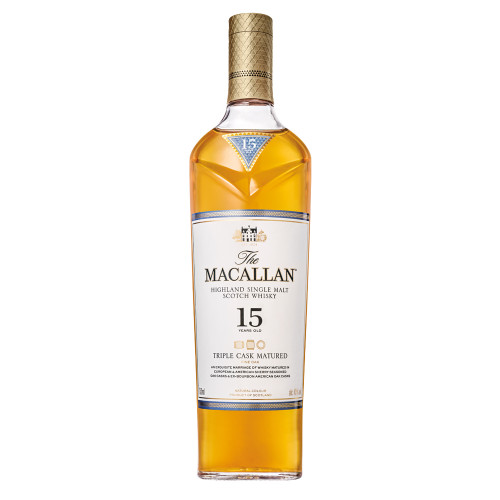 A lighter Macallan expression with a more complex character, The Macallan 15 Year Old Triple Cask Matured is crafted in a triple cask combination of European and American Sherry-seasoned oak casks and American ex-bourbon oak casks. This unique marriage gains quite a bit by aging three more years than its younger sibling. A sublime whisky, It’s richer and deeper with a natural rich straw color and decadent flavors of orange and chocolate cream.

The aroma is perfume-like with florals, baking spices, and vanilla. The palate is light but at the same time intense and complex with chocolate ganache, candied orange, and sultanas. The finish lingers with notes of warm Christmas cake.