Size750mL Proof86 (43% ABV)
A showcase of the vast knowledge, passion, and skill of The Macallan's Whisky Mastery Team, this expression is aged in the finest sherry-seasoned oak casks, imparting the spirit with intense raisin notes and an unparalleled smoothness.
Notify me when this product is back in stock. 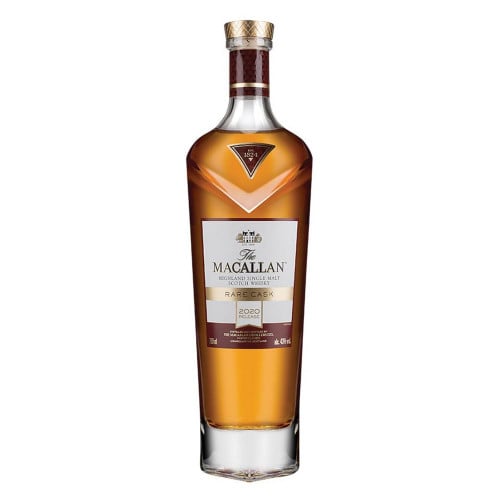 The 2020 release of The Macallan Rare Cask showcases the finest sherry-seasoned oak casks that The Macallan Whisky Mastery Team seeks out. The Macallan Whisky Maker Robert Dalgarno hand selects less than 1% of casks. The team utilizes their vast knowledge, passion, and skill when selecting these unique casks to craft the exquisite, unique, and woody profile with opulent vanilla, dried fruit, spice and an unparalleled smoothness. Bottled at 86 proof, it's a luxurious expression that showcases the skill of The Macallan's fabled Masters of Wood.

Vanilla, raisin, apple, lemon, and orange lead the charge on the nose. The palate has more of that raisin richness which gives way to vanilla, dark chocolate, and citrusy notes, culminating in a silky-smooth and long finish.