Size750mL Proof88 (44% ABV)
This expression is the first release in The Macallan's new annual series ― The Harmony Collection. The inaugural release had them partner with renowned pastry chef Jordi Roca in order to craft a luxuriously rich and deep single malt with prominent chocolate notes. 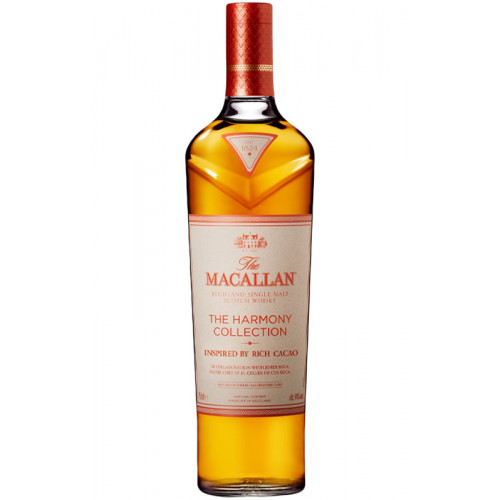 The Macallan Harmony Collection is a new series of annual releases that takes its inspiration from nature and the distillery's long-standing connection with it. For the inaugural release, The Macallan have turned to their long-time partners, the Roca brothers. This expression had them collaborate with pastry chef Jordi Roca in order to bring together the worlds of whisky and chocolate. "I sought out a specific chocolate note in The Macallan’s traditional sherry seasoned European oak casks and combined this with a vanilla note imparted by sherry seasoned American oak casks to sweeten the slightly bitter chocolate note I had found," says The Macallan's Whisky Maker Polly Logan of the release. The first single malt in the limited-edition series is an exceptionally rich 88-proof spirit with notes of dark chocolate permeating the profile.

Grab the first whisky in the new annual series today!

The nose opens with an enticing balance of chocolate, honey, oak, lime zest, and ginger aromas. The palate has honey, dark chocolate, dates, vanilla, and a touch of cinnamon spice. The finish is long and rich with lingering chocolate.