This product is available in: CA, CT, WA Unfortunately, we can't ship to PO Boxes and APO addresses.

Size700mL Proof86 (43% ABV)
The Macallan's Double Cask series gets a new king in the form of this 30-year-old single malt. The mature whisky was aged in sherry-seasoned American and European oak casks for the ultimate in harmony and balance.
Notify me when this product is back in stock.

This product is available in: CA, CT, WA Unfortunately, we can't ship to PO Boxes and APO addresses. 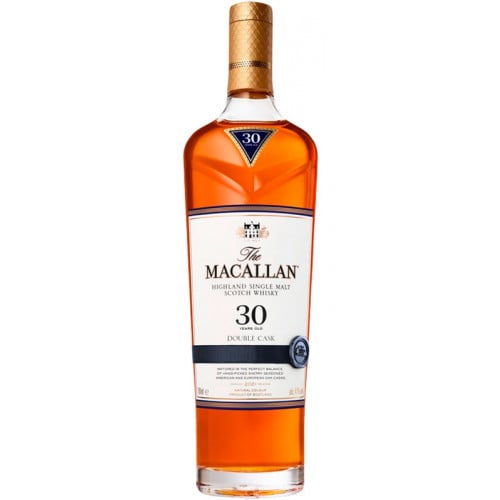 The Double Cask range combines the sweetness of American oak with sherry-seasoned American and European oak casks. These are hand-picked by the wood masters at Macallan. The new American oak is first brought to Spain to be assembled and sherry-seasoned before the barrels travel to Speyside for the maturation. The whiskies are then combined with European oloroso sherry casks. Until recently, the 18-year-old represented the top of the range. The Macallan Double Cask 30 Year Old now takes the throne. The very special single malt is all about harmony and balance. The drinking experience is the embodiment of the extraordinary journey that the wood has taken.

This whisky is all about balance and harmony. The nose opens with enticing fresh honeycomb, toffee, red apple, fig, and vanilla aromas. The palate is lush with cinnamon, ginger, vanilla, dried fruit, and oak notes. There's a lingering oaky sweetness on the finish with soft spice and toffee.