Learn more
Size750mL Proof86 (43% ABV) *Please note that the ABV of this bottle may vary
The Macallan Fine Oak Range is an exquisite series. Jim Murray calls it “jaw-droppingly” good, with great “depth and sophistication.”
Notify me when this product is back in stock. 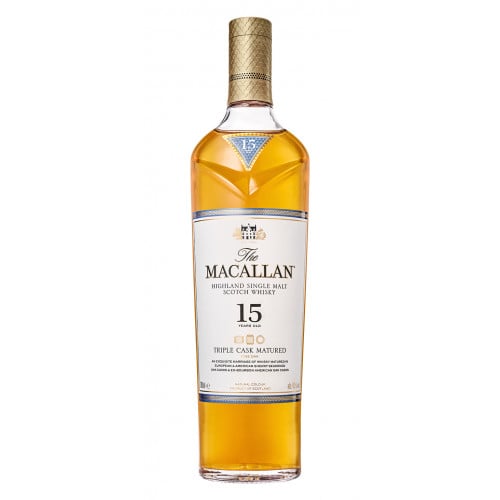 Following distillation, The Macallan distillers remove the heads and tails of the whisky and collect approximately 16% of the spirit to fill into casks for maturation. This “cut," which is among the highest of any Scottish distillery, results in a more full-bodied, rich whisky.

The Macallan has an exquisite Fine Oak Range, a series of whiskies aged in oak barrels with age statements ranging from 10 to 30 years. This 15-year-old whisky undergoes a triple maturation, with two types of wood, American and European ex-sherry and American ex-bourbon barrels.

The nose is sublime and full with a hint of rose and cinnamon. The palate is Intensely rich with chocolate and a hint of orange and raisin. The finish is lingering with a hint of chocolate, orange, and dried fruits.