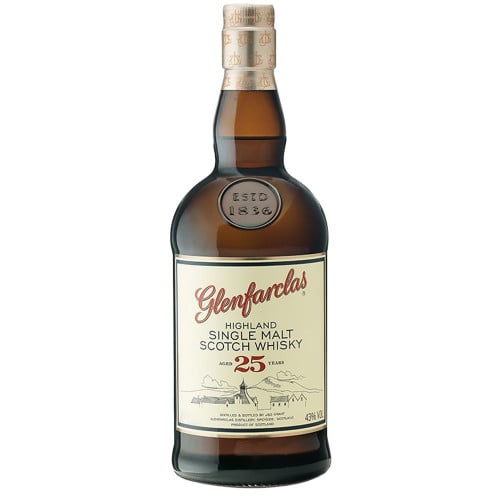 Glenfarclas 25 Year Old Single Malt Scotch Whisky is made from freshly harvested barley, which is steeped in water sourced from the heather-clad slopes of the Ben Rinnes mountain. The crystal-clear spring water, which cascades down the 3,000-foot mountain through peat and granite, is the lifeblood of the Glenfarclas Distillery. After the barley is malted, it is milled and mashed before being fermented using 100% cultured distiller's yeast.

The wash — the liquid that remains after fermentation — is then distilled twice through Glenfarclas' copper-pot stills. While most distilleries use steam-powered stills as they are more efficient and preserve the lifespan of the still, Glenfarclas Distillery continues to use direct-heated stills in order to preserve the traditional flavors of the whisky. After distillation, the heads and tails of the distillate (the whisky produced at the beginning and end of the distillation process) are discarded and only about 15% of the distillate — the heart of hearts — is preserved for maturation.

Glenfarclas 25 Year Old is the quintessential Speyside sherried single malt scotch. The whisky has a smooth, silky texture, along with a rich aroma of berries, tropical fruits and fruitcake. The aroma gives way to notes of hazelnuts, toffee, dried fruits, milk chocolate and espresso on the palate. The finish is rich and everlasting, with hints of cherries, chocolate and nutty smokiness.