Learn more
Size750mL Proof108 (54% ABV) *Please note that the ABV of this bottle may vary
This rare cask strength Irish whiskey uniquely numbered and signed by the Walsh Whiskey co-founder and Managing Director — Bernard Walsh.
Notify me when this product is back in stock. 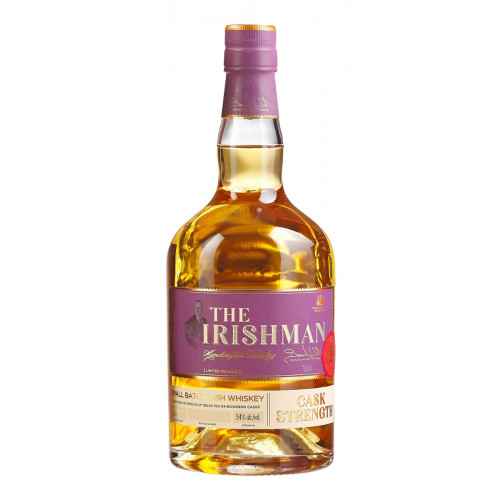 Deep within the scenic Carlow countryside, sits the 18th century home of the Walsh Whiskey. The family-owned and operated company was founded by Bernard and Rosemary Walsh, previous owners of a ski chalet in France, in search of the perfect Irish whiskey with which to spike their famous coffee. Eventually, their search led them to the founding of their whiskey brand Irishman in 1999.

Set out to rediscover Irish-style Whiskey as it was made 200 years ago, they initially contracted their distilling to Bushmills. After becoming successful, they were eventually able to build their own distillery. The Walsh Whiskey ceremoniously opened in June of 2016, in the heart of Southern Irish farm country — where they produce four versions of The Irishman, three Writer’s Tears, and two varieties of Irish Cream Liqueur.

The picturesque Walsh Whiskey distillery marks the return of Whiskey distilling to County Carlow for the first time in over 200 years. With its three specially crafted imported pot stills — built in the legendary Scottish Forsyths — and two, forty plate column stills. They are the only independent Irish Whiskey to produce the three styles of Irish whiskey — pot still, malt, and grain under one roof, in one still room. Walsh Whiskey can produce 650,000 cases of whiskey per annum.

This 2019 vintage of The Irishman Vintage Cask, is a rare cask strength Irish whiskey uniquely numbered and signed by the company’s co-founder and Managing Director — Bernard Walsh. This is the 11th release since 2008, and their first triple-distilled whiskey in half a century.

Notes of baking spice and sweet vanilla blossom on the nose, the palate is rich with chocolate, smooth caramel, summer fruits, and cracked pepper. The finish is lingering.