Learn more
Size750mL Proof86 (43% ABV) *Please note that the ABV of this bottle may vary
Unlike other Scotch distilleries that bottle their whiskies with an age statement, The Glenrothes Distillery bottles its whisky with a vintage statement. This exceptional Single Vintage whisky scored 94 Points at the 2017 Ultimate Spirits Challenge.
Notify me when this product is back in stock. 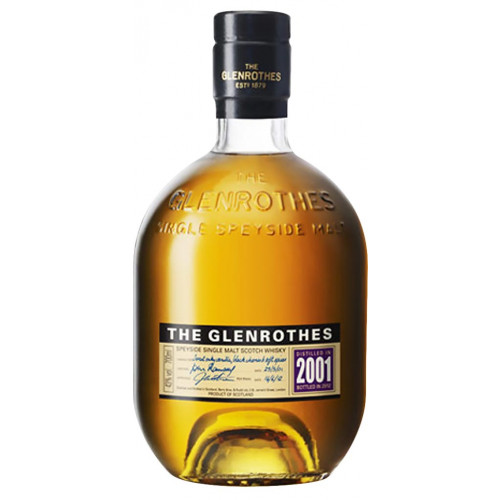 About The Glenrothes 2001 Vintage

The Glenrothes Vintage 2001 comprises a selection of casks from 2001 handpicked by our Master Whisky Maker at the peak of their maturity and flavor. This vintage expression has wonderful length and depth. It combines the maturity of oaky vanilla, with the fullness of ripe black cherries and has a lingering, typically Glenrothes finish of soft spices.

Situated adjacent to the Burn of Rothes in the Speyside region of Scotland, The Glenrothes Distillery was founded by in 1879 by James Stuart, who had previously been employed at The Macallan Distillery. The distillery's history is marred by tragedy — in 1897, construction workers who were attempting to expand its capacity started a fire that consumed much of the distillery's equipment and infrastructure. Twenty-five years later, a fire in the distillery's original warehouse caused the loss of 200,000 gallons of maturing whisky. Despite having lost ten copper-pot stills in various accidents since its founding, the Glenrothes Distillery is now a picture tranquility.

Glenrothes Single Malt Scotch Whisky is made from plump, ripe Scottish barley, which is malted and fermented using water sourced from the Ardcanny and Brauchhill springs (the springs are situated adjacent to the distillery). Following fermentation, the grains are twice distilled through Glenrothes' copper-pot stills. The stills, which were designed and fashioned to be exact replicas of the original stills installed in 1879, are incredibly tall and uniquely shaped, which contributes to the overall light and sweet flavor of the whisky. After distillation, The Glenrothes' still remove the heads and tails of the distillate and preserve only the "hearts" for maturation (the hearts comprise less than 20% of the entire distillate).

Unlike other Scotch distilleries that bottle their whiskies with an age statement, The Glenrothes Distillery bottles its whisky with a vintage statement. This method of bottling, which emphasizes maturity rather than age, allows each expression of Glenrothes Single Malt Whisky to have its own unique characteristics and personality without being encumbered by its ancestors.

The Glenrothes is an award-winning Speyside single malt of exceptional quality and a pioneering mindset in the Scotch whisky industry. All their Single Malt is Vintage Whisky. And when we say Vintage, we don't just mean aged; we mean whisky distilled in a particular year that has reached its peak of maturity, character and flavor. At which point, the fine people at Glenrothes have a choice to make: to either bottle these rare and finite expressions as Single Vintages, or marry them together in perfect harmony to create one of our exquisite Reserves. This exceptional Single Vintage whisky scored 94 Points at the 2017 Ultimate Spirits Challenge.

Golden straw, clear and bright tones. The bouquet has notes of lemon meringue pie, sandalwood and a hint of black cherries. On the palate is oaky vanilla, and cream topped with grated nutmeg. The finish is sweet oaky vanilla with lingering soft dry spiciness.