Learn more
Size750mL Proof80 (40% ABV) *Please note that the ABV of this bottle may vary
Aged for 9 years in ex-bourbon casks, half of the whisky is then finished in 30-year-old Matusalem oloroso sherry casks, while the rest stays in the American oak for another 3 years. The gift pack comes with 2 stemmed glasses sporting the Dalmore Royal Stag logo.
Notify me when this product is back in stock. 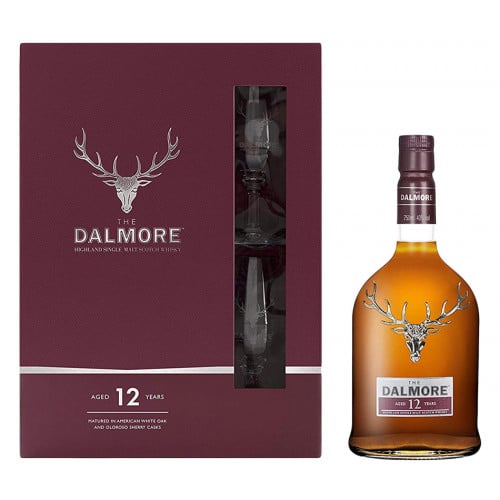 Dalmore Distillery 12-Year-Old Single Malt Scotch Whisky is aged for nine years in American oak casks that were previously used to mature bourbon. Following its initial beauty rest, half of the whisky is double-barreled or finished, for three years in 30-year-old Matusalem oloroso sherry casks (the remainder matures for an additional three years in the bourbon casks). This dual maturation process gives the whisky an aroma of caramelized oranges, apples, plums, and marzipan. Notes of citrus, toffee, and cinnamon dominate the palate and are complemented by sweet undertones of vanilla, coffee, and cake. The finish is long and sweet, with hints of apricots, cherries, and vanilla.

The Dalmore 12-Year-Old Single Malt Scotch Whisky earned a Gold Medal at the San Francisco World Spirits Competition and earned a score of 91 points from the Beverage Testing Institute. This gift set comes with a pair of stemmed glasses branded with The Dalmore Royal Stag logo.

Aromas of citrus fruits, chocolate, and aromatic spices. Orange, dried fruits and a hint of vanilla are on the palate, followed by roasted coffee and dark chocolate on the finish.