Size750mL Proof92 (46% ABV)
Celebrating the Lunar New Year, this limited-edition Blue Label is bottled at 92 proof. It features artwork by Shan Jiang, depicting a mystical winged tiger flying towards a modern city, signifying progress and good fortune in the coming year.
Notify me when this product is back in stock. 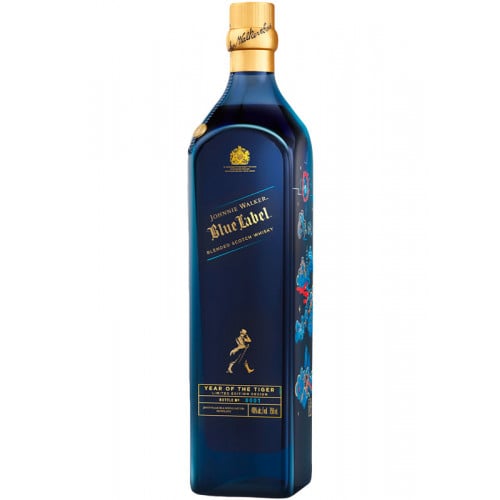 The Blue Label is something of an institution. Only 1 in 10,000 casks from the company’s reserves of over 10 million maturing whiskies have what it takes to be blended into this masterpiece, including some extra-precious casks from long-closed "ghost" distilleries. Johnnie Walker Blue Label Blended Scotch Whisky represents the epitome of blending and the pinnacle of the House of Walker whisky. The special releases of this whisky are highly collectible and sought-after with various different designs. Johnnie Walker Blue Label Year of the Tiger lets you celebrate the 2022 Chinese New Year in style. Celebrating the Lunar New Year, it's bottled at 92 proof. The elegant and bold design features artwork by Shan Jiang ― a mystical winged tiger flying towards a modern city, signifying progress and good fortune in the coming year.