Learn more
Size750mL Proof94.2 (47.1% ABV) *Please note that the ABV of this bottle may vary
A limited-edition expression, this single malt was crafted by marrying together 42 unique casks of whisky.
Notify me when this product is back in stock. 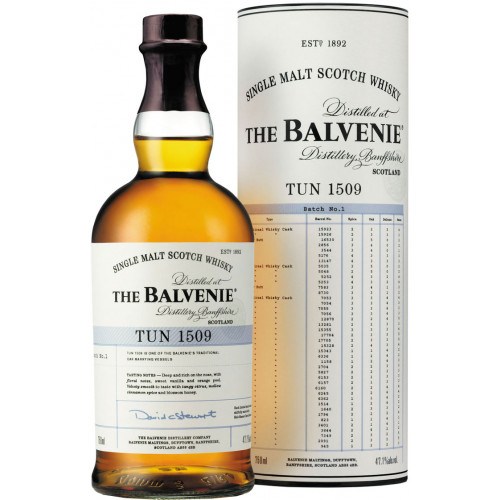 Once the barley has been malted, it is milled and mashed at the distillery before being fermented using a proprietary strain of yeast. Following fermentation, the wash is distilled twice, first through Balvenie's copper-pot wash still and then again through its copper-pot spirit still. "The most important reason for using a copper still,"explains Dennis McBain, Balvenie's coppersmith, "is that it acts as a catalyst. It removes any sulphur which may be carried over from the fermentation process prior to distillation."McBain, who joined Balvenie Distillery in 1959, is one of the oldest coppersmiths remaining in the industry.

In addition, the size and shape of Balvenie's stills — the stills' necks have unique boil balls that are nicknamed "Balvenie Bowls"- results in Balvenie's signature bold and malty flavor profile. "The size and shape of the boil ball allow for the vapors to mix before continuing up the head,"explains McBain. "That helps make The Balvenie special."

Balvenie Tun 1509 Batch #1 was made by marrying together 42 of the finest casks — 35 traditional American Oak barrels and seven European oak sherry butts — from Balvenie’s aging stock. Each of the casks was hand-selected by David Stewart, who has served as Balvenie's Malt Master for the past five decades. “I’ve carefully considered each of the 42 whiskies in turn and they all bring something different to the table: combinations of spice, oak, delicacy and sweetness,” says David Stewart.

Once the whisky was blended together, Stewart rested it for several months in Tun 1509 — one the distillery's unique marrying vessels — to create a single malt that was greater than the sum of its already precious parts.