Size750mL Proof80 (40% ABV)
This Templeton rye is the perfect entry point into their lineup of rye whiskey. Aged 4 years in charred new American oak casks, it has won a Double Gold Medal at the SIP awards and a Double Gold at the San Francisco World Spirits Competition in 2020. 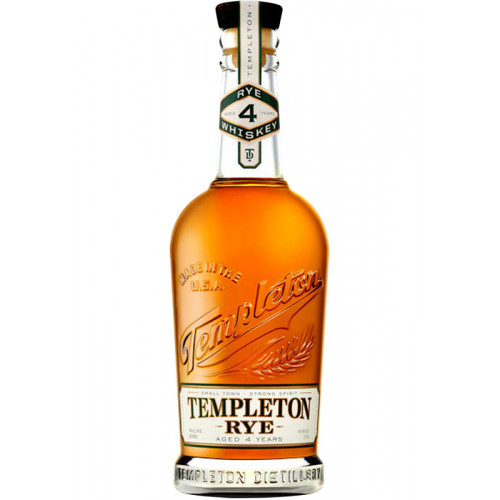 Shortly thereafter, Kerkhoff partnered with notorious bootlegger Al Capone to distribute his rye across the country. Capone bootlegged hundreds of barrels of Templeton Rye to speakeasies in New York, Chicago and as far west as San Francisco — legend has it that he even had a case smuggled into his jail cell at Alcatraz. Following Prohibition, Kerkhoff continued to cook Templeton Rye for his friends and family, before eventually passing the recipe on to his son, Meryl. Today, nearly a century after it was first distilled, Templeton Rye pays homage to that recipe by Keith Kerkhoff, Alfonse's grandson.

Templeton Rye is made in Indiana from a variety of winter and spring rye grains that possess specific organoleptic qualities. The rye (which comprises over 90% of the mash bill, with the remainder being malted barley) is fermented for 72-84 hours using a yeast culture that was developed specifically for whiskey production. After fermentation, the mash is double-distilled and then aged in charred, American white oak casks (sourced from a Missouri cooperage). The whiskey is bottled in Templeton, Iowa, where Iowa's hot summers, cold winters and wet springs (monthly average temperatures range from a high of 86.2° F to a low of 6.3° F) result in more contact between the whiskey and the oak prior to bottling, helping the whiskey mature faster and giving it more complexity and flavor.

Templeton 4 Year Old Rye is their entry-level expression ― the perfect way to dive into their range. Aged 4 years in charred new American oak casks, it's a versatile whiskey that is ideal with ice or in various classic whiskey cocktails. Bottled at 80 proof, it's a balanced expression with notes of spice, caramel, and toffee. It has won Double Gold at the SIP Awards and a Gold Medal at the San Francisco World Spirits Competition in 2020.

The nose is dry with grassy aromas and baking spice. On the palate, you'll find caramel, butterscotch, toffee, and allspice notes. The finish is lingering, balanced, and smooth.