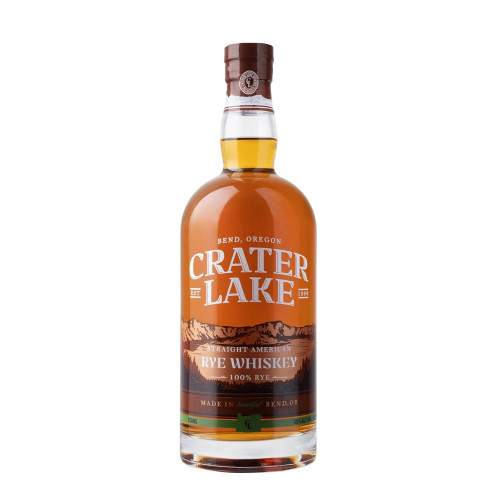 Crater Lake Straight American Rye Whiskey is a stunning rye expression that's been aged for 2 years in 53-gallon American oak barrels with #4 char. Made with a 100% rye mash bill, the rye is sourced from the Northwest. When the whiskey is ready, it's cut to proof with Cascade Mountain water. Bottled at 80 proof, the result is a spectacular rye of a bright honey color that begins with smooh flavors of creamy toffee and vanilla, developing further into peppery spices and soft oak notes. Best enjoyed neat, on the rocks, or in a rye-forward cocktail, this is truly a classic American rye.

Founded in 1996 in Bend, Oregon, Bendistillery is one of the oldest small batch distilleries, known for its premium, small batch spirits. Using locally sourced ingredients, they produce an award-winning range of Crater Lake vodka, gin, and rye whiskey, including infused vodkas, ground-to-bottle-estate expressions, and special products, like a hatch green chili vodka. In 2010, the distillery expanded to nearby Tumalo, where you can visit their tasting room on a 24-acre picturesque estate with the magnificent Cascade mountains in the background.

Bright, rich honey hue. A sweet and spicy nose, followed by a smooth and well-balanced palate with creamy toffee, vanilla, peppery spices, and soft oak notes. The finish is smooth and complex.