Size750mL Proof84 (42% ABV)
Aged for a minimum of four years, this bourbon earned the Gold Medal at the American Distilling Institute Competition in 2012.
Notify me when this product is back in stock. 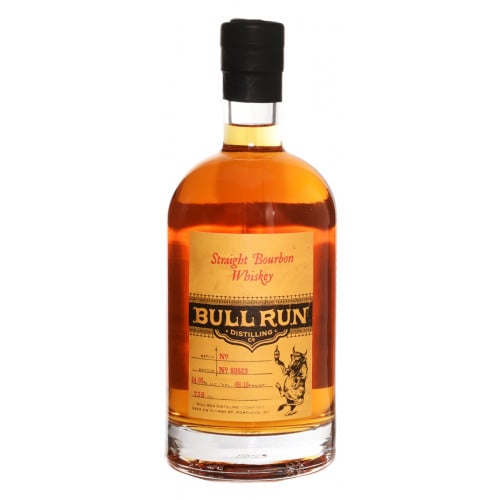 In the 1850s, cattle belonging to pioneers crossing the Cascade Mountains escaped into the dense forests of northwest Oregon. After the pioneers settled the territory, they often spotted the cattle grazing alongside the local lake or drinking from the adjacent river. As a result, the frontiersman began calling these bodies of water Bull Run Lake and Bull Run River.

Situated along the banks of the Bull Run Watershed, Bull Run Distilling was founded by master distiller Lee Medoff, together his with friend, Patrick Bernards. "The history of Oregon and quality of Bull Run water were so important to our whiskey that we wanted to include it in our name," says Medoff. "It was natural."

Bull Run Straight Bourbon Whiskey is a sourced bourbon made from a mashbill composed of 65% corn, 25% rye and 10% malted barley. After the bourbon is aged for a minimum of four years (although a number of barrels are aged as long as five years) in 53-gallon, charred American oak barrels, Medoff hand-selects fewer than a dozen barrels to blend together. "I'm looking for that perfect combination of sweet and spicy,"he says. "We already have a lot of rye in the bourbon, which helps counter the flavor of the sweet corn, but I'm looking to get that perfect balance."

After selecting a handful of barrels, the bourbon is blended together and brought to proof with water from the Bull Run Watershed. The water, which many experts believe is one of the purest sources of raw water in North America, contributes a unique mouthfeel to the bourbon and leads to a softer, more supple flavor profile.

Bull Run Straight Bourbon Whiskey has initial notes of butterscotch and toffee, which lead to spicy and warm notes of rye. The finish, which is smooth and complimented by a touch of honey and caramel, earned Bull Run Bourbon the Gold Medal at the American Distilling Institute Competition in 2012.

Initial flavors of butterscotch and toffee, which lead to spicy and warm notes of rye. Finish is smooth and clean, with a touch of honey, vanilla and caramel.