Learn more
Size750mL Proof109 (49.5% ABV) *Please note that the ABV of this bottle may vary
This special Brabazon Bottling is named after the Brabazons, a prominent family from Dublin. Bottling No. 1 received a Silver medal for the Irish Single Malt Super Premium category at the 2017 Irish Whisky Masters.
Notify me when this product is back in stock. 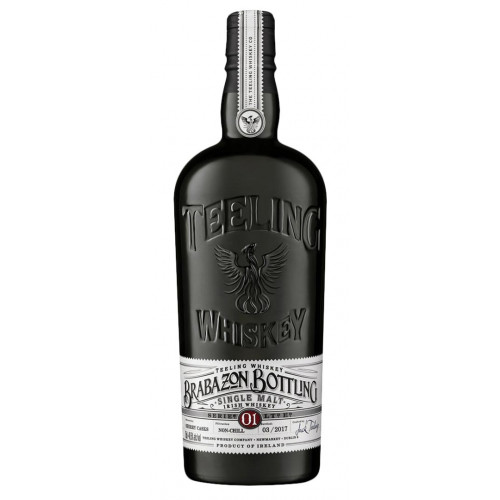 This release from Teeling distillery is the first of a new series of limited edition single malts, called the “Brabazon Bottling.” This series is an innovative take on the original Irish whiskey, seeking to create new and interesting expressions and expanding the Irish Single Malt category. 2015 marked a new year and a new generation of Teelings who returned to their roots in the Liberties area of Dublin City and Newmarket. The Brabazons family is synonymous with this area of the city, residing there from the 16th to 19th century, when the city brimmed with industry.

Jack Teeling, Teeling Whiskey Founder and Managing Director, said “Our new Irish Single Malt brings together two famous Dublin family names – the Teelings and the Brabazons. By making reference to the historical Brabazon name, we are telling the story of why our family first came to the Liberties area of Dublin. But more importantly we are telling the story of why we are here now. Our aim with the whiskey was to create a full bodied tasting experience for people who enjoy the added complexity and taste sherry casks impart, and at the same time continuing our goal to expand the spectrum of flavours available from premium Irish whiskeys.” This special bottling No. 1 received a Silver medal for the Irish Single Malt - Super-Premium category at the 2017 Irish Whisky Masters.

Notes of dried fruit on the nose with roasted hazelnut, peaches, and charred toffee. The palate is rich with sherry, nuttiness, red berries, toffee, and baking spices. The finish is lingering with nutty flavors, spice and toasted wood tannins.