Size750mL Proof82.6 (41.30% ABV)
Made with natural flavors and certified colors, Tanqueray Sevilla Orange Gin brings you the unique bittersweet and zesty taste of Seville orange and the complexity of a Tanqueray London Dry Gin. The most "summer" gin you'll ever taste. 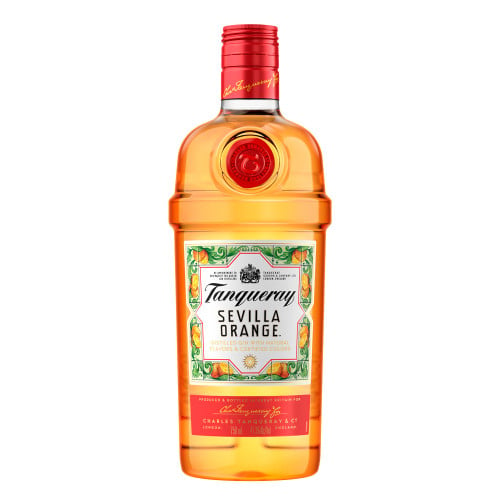 Made with natural flavors and certified colors, Tanqueray Sevilla Orange Gin brings you the unique bittersweet and zesty taste of Seville orange and the complexity of a Tanqueray London Dry Gin. Named the Bartenders’ Choice of Gin and one of the top-trending gins at the 2020 Drinks International Awards, this quintessential summer gin was inspired by Charles Tanqueray’s original recipes.

After merging with Gordons & Company in 1898, Tanqueray had successfully established itself as a formidable force in the spirits industry. The Tanqueray facility was nearly destroyed in 1941, during the great air raid of 1941. Only one of the stills survived, the still known as “Old Tom”, which still resides at Tanqueray’s permanent home in Cameron Bridge, Scotland. The brand is now owned by industry giant Diageo.

The nose greets with orange blossoms and fruity aromas. The palate is vibrant with a hint of juniper berries and citrus fruits. The finish is long, sweet, and well-balanced.