Learn more
Size1750mL Proof82.6 (41.3% ABV) *Please note that the ABV of this bottle may vary
Tanqueray Rangpur Gin unveils the best-kept secret of the British-Indian tradition. 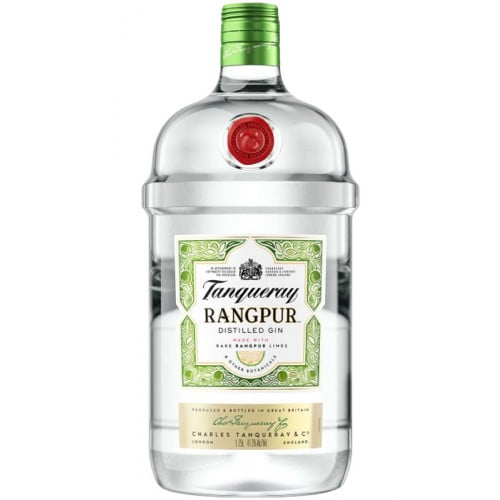 After merging with Gorgons & Company in 1898, Tanqueray had successfully established itself as a formidable force in the spirits industry. The Tanqueray facility was nearly destroyed in 1941, during the great air raid of 1941. Only one of the stills survived, the still known as “Old Tom”, which still resides at Tanqueray’s permanent home in Cameron Bridge, Scotland. The brand is now owned by industry giant Diageo.

The standard Tanqueray gin has four botanicals; juniper, coriander seed, angelica root, and liquorice. Together they yield a smooth, harmonious juniper forward gin. Unlike most gins Tanqueray lacks the citrus botanical, making it drier than most gins.

Presented in a signature green glass vial with a pineapple and axes, the pineapple represents both hospitality and prosperity, while the two axes are allegedly a symbol of the family’s role in the third crusade.

Tanqueray sells over 2 million cases each year, making it one of the top five selling gins in the world. Produced in Cameron Bridge using a one shot distilling method, Tanqueray Rangpur Gin “unveils the best-kept secret of the British-Indian tradition. The rare Rangpur lime, traditionally used to smooth down the gin, brings an exotic bold flavor to the already perfect combination of juniper, coriander, bay leaves and ginger” (Tanqueray).

Ample fresh zest and herbs on the nose. A well balanced and refreshing harmony of flavors on the palate. The finish is smooth and dry with a clean citrus aftertaste.