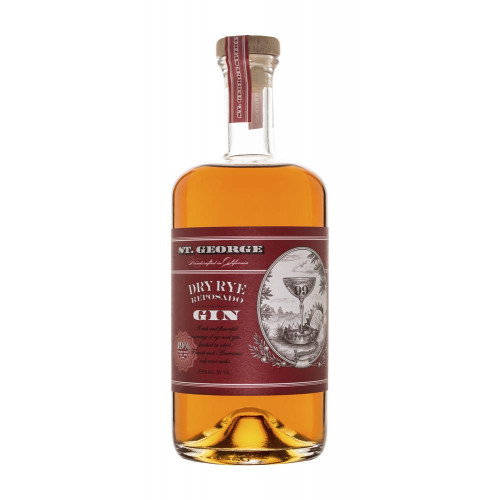 Back in 1982, St. George Spirits was founded as an Eau de Vie distillery by Jorg Ruph in Alameda, California. One of the pioneers of the craft spirits movement, St. George Spirits was the first small American distillery since Prohibition, focusing on making brandy from Californian fruits at the beginning. Producing their first single malt in 1997, St. George Spirits expanded in 2004 and moved into a 65,000-square-foot airplane hangar. In 2007, they released the first legal American absinthe since the 1912 U.S. ban. Named everything from "the best craft distillery in America","craft whiskey of the year", and "craft whiskey producer of the year", St. George boasts a wide range of craft products including gin, eau de vies, rum, whiskey and absinthe.

While the name might be a bit confusing, St. George Dry Rye Reposado Gin is still technically a gin. The production process starts with their Dry Rye Gin, a 100% rye grain spirit base, which is infused with 6 botanicals – juniper berries, black peppercorn, caraway, coriander, grapefruit peel and lime peel. A unique, barrel-aged expression of their Dry Rye Gin, the Dry Rye Reposado was aged for about 18 months in French and American oak wine casks, previously home to Grenache rosé, Syrqh and Tannat, coming from local Blacksmith Cellars. Resulting in a copper-pink color and a robust malt character with deep, rich flavors and spicy notes, this one is bottled at 99 proof. It’ll feel right at home in an Old Fashioned, Manhattan or any classic rye cocktail, but it also goes well with sherry, ume shu and ginger.

Distinct copper-pink color. The nose greets you with juniper and notes of wet grasses and grapefruit. The palate is warm and has a robust malt character with notes of rye spice, juniper and a touch of plum and citrus flavors. The finish is warm and dry with lemon zest notes.