Size750mL Proof92 (46% ABV)
Made using a secret blend of ten different botanicals and spices, this gin earned the Gold Medal at the Beverage Testing Institute Competition in 2016.
Notify me when this product is back in stock. 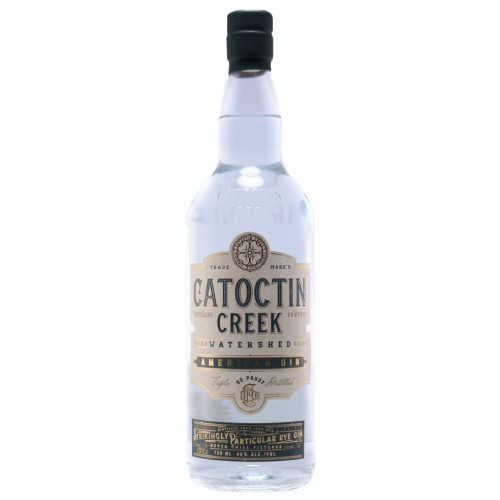 Situated just off the banks of a tributary to the Potomac River, Catoctin Creek Distilling Company Distillery was founded in 2009 by Scott and Rebecca Harris. Their distillery, located in Purcellville, Virginia — the heart of Virginia's Wine Country — is surrounded by the grapevines of over thirty unique wineries.

Scott, who graduated from Georgia Tech and previously worked as a software engineer, handles the marketing and distribution of Catoctin Creek Distilling Company spirits. Rebecca, who received a degree in chemical engineering from the University of Wisconsin and worked for years as a chemist at Amoco Foam and CIBA Vision, does "the lion's share of the distilling," Scott sheepishly admits.

Catoctin Creek Distilling Company Watershed Gin — named after the Chesapeake Bay watershed into which Catoctin Creek Distilling Company flows — is handcrafted from organic rye grains. After twice distilling the rye grains, a secret recipe of ten different herbs and botanicals, including juniper, coriander, anise, cinnamon and orange peel, are macerated into the rye-grain distillate. "We wanted to make a modern-gin but we also wanted to pay tribute to all the gin-makers that came before us and express the natural beauty of our community," says Rebecca, who notes that the gin is 100% organic and kosher and that the spent rye grains are fed to local cattle.

After maceration, Harris distills the gin a third time through her custom-made, 400-liter Kothe hybrid pot-column still. "Scott likes to compare it to a German sports car, "Rebecca says of the still", and really, it handles incredibly well."

After distillation, the gin is brought to 100 proof before the Harrises fill and label each bottle by hand. Watershed Gin is remarkably soft and approachable — it has a medium weight and notes of cinnamon, citrus, spearmint, anise and peppercorn. Modern yet classy, Watershed Gin earned the Gold Medal and a rating of "Exceptional" at the Beverage Testing Institute Competition in 2016 and the Silver Medal at the New York International Spirits Competition the same year.

Pick up a bottle of this award-winning gin today!

Bouquet of flowers on the nose, with juniper and hints of lavender. Soft and approachable notes of cinnamon and pepper, which nicely balance out the notes of citrus zest and spearmint.