This product is available in: FL, NY, WA Unfortunately, we can't ship to PO Boxes and APO addresses.

This product is available in: FL, NY, WA Unfortunately, we can't ship to PO Boxes and APO addresses. 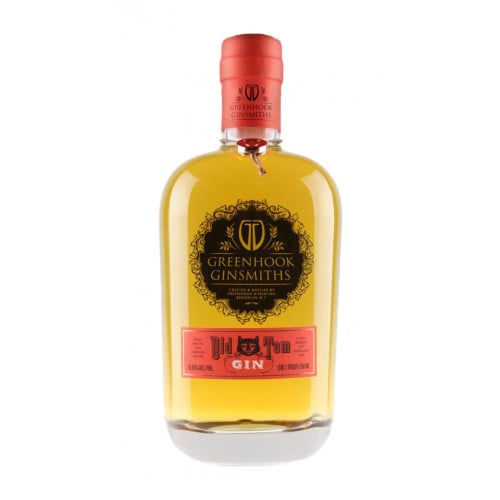 Old Tom Gins first became popular in 18th century London. The gins were made to be slightly sweeter than London Dry Gins and slightly drier than Dutch Jenevers, and were often considered to be the "missing link" in the gin industry. The name of the gin is derived from black cats (the "Old Toms") that were often mounted on the wall of British pubs centuries ago. Pedestrians walking past the pub could deposit a coin under the cats paw without ever entering the building. The bartender would collect the coin and in exchange, pour a shot of gin to the customer.

Greenhook Ginsmiths Old Tom Gin is a bold and crisp gin born in the heart of Brooklyn. The gin is made from a backbone of pot-distilled grains, which are distilled with juniper and other exotic spices inspired by the British spice trade that prevailed during the 18th century. After the gin has been distilled, it is matured for 12 months in casks that were previously used to mature bourbon. Then, master distiller Steven DeAngelo finishes the gin in ex-Oloroso Sherry butts before bringing it to 100.1 proof, where it is bottled.