Learn more
Size750mL Proof119.6 (59.8% ABV) *Please note that the ABV of this bottle may vary
Tamdhu Batch Strength No. 005 is a single malt Scotch whisky matured exclusively in finest Oloroso sherry casks from the bodegas of Jerez. The fifth expression in Tamdhu Distillery’s award-winning batch strength series is bottled at 59.8% ABV without chill filtration.
Notify me when this product is back in stock. 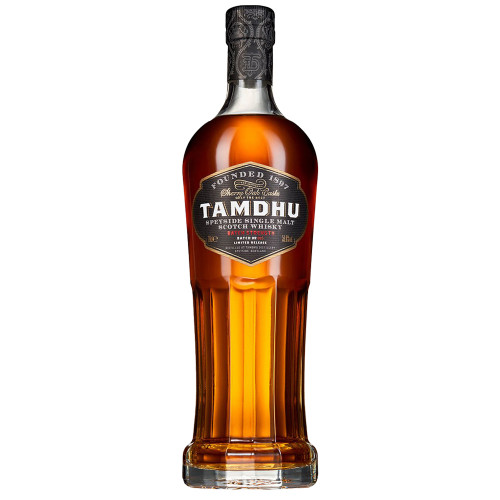 Tamdhu is a Speyside single malt Scotch whisky distillery, established in 1897 by a group of like-minded entrepreneurs, who raised today’s equivalent of £20 million, and filled their first casks with the vision of making the finest whisky in the world. To achieve that, they settled on nothing but the best. They enlisted the best distillery architect and engineer of the day, Charles C Doig ESQ, picked the perfect location by the banks of the River Spey, and chose the most advanced techniques. In 1898 the company secured its first precious shipment of sherry casks from bodegas in Spain, and has been maturing its whisky exclusively in the finest Oloroso sherry casks ever since. The distillery modernized its processes in 1949, introducing Saladin boxes, a French invention that mechanizes the barley turning process. The increasing production over the next 15 years required the company to scale up its maltings output, and at one stage it needed an impressive 10 Saladin boxes to meet the demand. Today Tamdhu is one of the last distilleries to malt all of its barley on the spot using a saladin. The 1970s whisky boom brought on another expansion of the distillery, and four stills were added, allowing the distillery to respond to the growing demand without compromising the exceptional quality of its spirit.

In 2010, the Tamdhu Distillery, owned by the Highland Distillers at the time, closed its doors. It however resumed operation only two years later, after being sold to Ian MacLeod Distillers, the world’s 10th largest Scotch whisky company. The new owners wanted to build upon the impressive Tamdhu legacy, and today the distillery makes its whiskies using the same processes and passion for sherry maturation as the founders had before them.

Tamdhu Batch Strength No. 005 is a single malt whisky matured exclusively in finest Oloroso sherry seasoned casks from the bodegas of Jerez. The fifth expression in Tamdhu Distillery’s batch strength series is bottled at 59.8% ABV without chill filtration.

On the nose, a subtle waft of warm vanilla is followed by cinnamon spice and roasted brazil nuts. The luxurious, thick mouthfeel is complimented by sharp summer berries cutting through rich double cream. The finish is long and lingering, delivering warming spices and the crisp sweetness of clementine zest.