Size750mL Proof115.6 (57.8% ABV)
This expression spends 25 years in a combination of American oak and European oak refill casks, resulting in an exceptionally smooth and full-bodied experience.
Notify me when this product is back in stock. 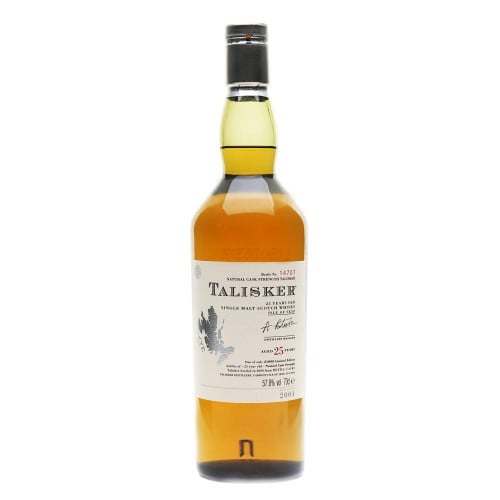 Following distillation, the annual limited edition Talisker 25 Year Old Single Malt Scotch Whisky is matured in American oak as well as some European oak refill casks for a minimum of 25 years. As a result, the whisky has a bold and rich aroma with notes of brine, oak, apples, citrus, pepper, and delicate peat smoke. Some floral notes develop on the palate along with salted caramel, chocolate, peaches, and noticeable warmth. The long and dry finish has wooden and smoky notes fading into a pleasant sweetness.

"Making Talisker demands long hours and no compromises, so I tour the distillery several times a day making sure no part of the process betrays the rest," says Lochhead.

The whisky has a bold and rich aroma with notes of brine, oak, apples, citrus, pepper, and delicate peat smoke. Some floral notes develop on the palate along with salted caramel, chocolate, peaches, and noticeable warmth. The long and dry finish has wooden and smoky notes fading into a pleasant sweetness.