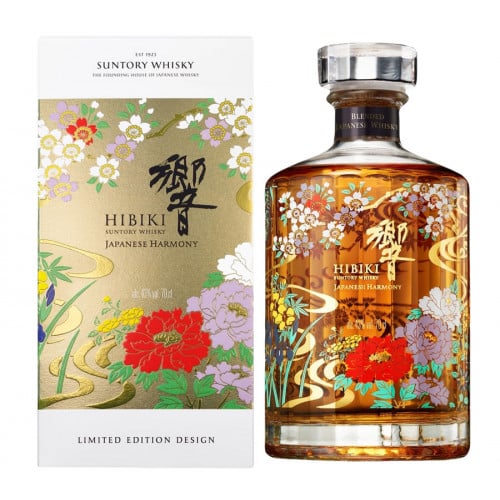 Although inspired by traditional Scottish distilleries, Torii envisioned a uniquely Japanese approach to whisky and chose a location for his distillery that offered a climate and terrain that were completely different than those of Scotland. Nestled on the periphery of Kyoto, Yamazaki Distillery is situated at the confluence of three rivers — the Katsura, Uji, and Kizu — that provide the warm, damp environment ideal for the production and maturation of whisky.

Hibiki Japanese Harmony Whisky is crafted from a blend of more than 12 unique grain and malt whiskies produced at Suntory’s Yamazaki, Hakushu, and Chita distilleries. The blend, which was developed by master blender Shingo Torii and chief blender Shinji Fukuyo, is composed of five key styles — Chita grain whiskey, which serves as the “broth,” malt whiskies aged in American oak casks, sherry casks, Mizunara (Japanese oak) casks, and finally a smoky malt whisky which adds hidden complexity to the blend.

Each bottle of Hibiki Japanese Harmony Whisky is crafted with 24 facets that represent the 24 seasons of the Japanese lunar calendar. The 2021 Limited Edition takes the design further, paying tribute to the Ryusui-Hyakka (One-Hundred Flowers and Flowing Water). It's a striking design, depicting the various blossoms of the Japanese 24 seasons, a stream of water flowing through them.

Grab your bottle of this Japanese whisky with a limited-edition design!

The whisky has a slightly floral aroma with additional notes of apricot, orange blossom, marmalade, and clove. The palate is dry, with plenty of raisins, honey, pear, and cinnamon, leading to a long and complex finish complete with malt chocolate, oak, pepper, candied apples, and a slight hint of smoke.