Size750mL Proof95 (47.5% ABV)
The Old & Rare series of Sullivan's Cove consists of their oldest and rarest single-cask treasures. This expression has spent 17 years in ex-bourbon American oak, resulting in an immensely complex and rich whisky that is some of the oldest to come from Australia.
Notify me when this product is back in stock. 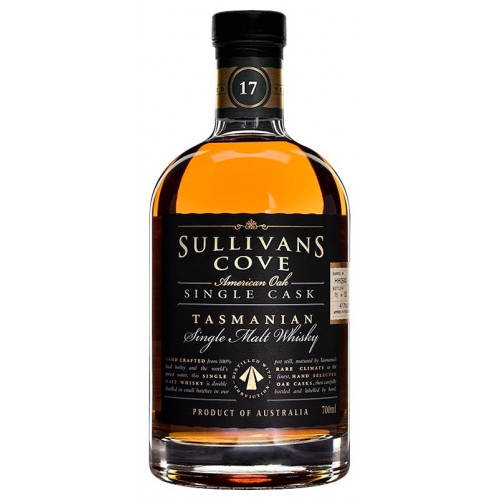 Situated along the banks of the River Derwent on the island of Tasmania, Sullivans Cove was the site of one of Britain's first penal colonies in Australia. In 1804, at the order of the Governor King of the British settlement of New South Wales, Lt. John Bowen transported some of the most heinous British criminals to Sullivans Cove, which eventually developed into the city of Hobart. Hobart was the perfect penal colony — the area's dense forests required a huge labor force in order to establish a settlement, and its isolation and inaccessibility ensured there was no escape. Today, the island of Tasmania remains one of the most isolated and natural places on earth — approximately 37% of the island is protected as natural reserves.

Once the barley has been harvested, it is malted at the Cascade Brewery by Roger Ibbott, who has over four decades of experience malting barley. The malted barley is then mashed and fermented at Sullivans Cove Distillery using a unique strain of yeast developed specifically for the production of Sullivans Cove Whisky. Then, the wash is distilled twice through a handmade copper-pot still. "The real trick is to cut the run short, so that only the sweetest, best flavors and purest alcohol from the heart of the run is captured", says Macguire. "It's not the most sensible approach by an accountant's standards, but then it's a good thing that we are not accountants!"

The Old & Rare series holds their most precious whiskies. While they normally age their spirits between 10 and 12 years, some casks with exceptional qualities are singled out during maturation. These qualities make them suitable for longer aging periods, benefiting from the extended process. These Single Cask bottlings contain the oldest and rarest Australian whiskies. This particular expression has spent 17 years in its ex-bourbon American oak cask, before being bottled at 95 proof and labeled by hand. The bottle is presented in a unique wood box with a letter of authenticity that's signed by head distiller Patrick Maguire and production manager Heather Tillott.

Pick one of these exquisite bottles up today!

The nose opens with caramel, toasted nuts, fruit, berries, and floral undertones. There are citrus, vanilla, malt, caramel, oak, and dried fruit notes on the palate, along with a touch of peppery spice. The finish is equally complex with long-lingering notes.