Caskers Rewards members earn up to 37 store points back when buying this bottle.
Size750mL Proof80 (40% ABV)
Aged for a minimum of 12 years, this whisky was named the "World's Best Single Malt Whisky" by Whisky Magazine in 2014.
Notify me when this product is back in stock.

Caskers Rewards Caskers Rewards members earn up to 37 store points back when buying this bottle. Learn more
Out of stock
Skip to the end of the images gallery 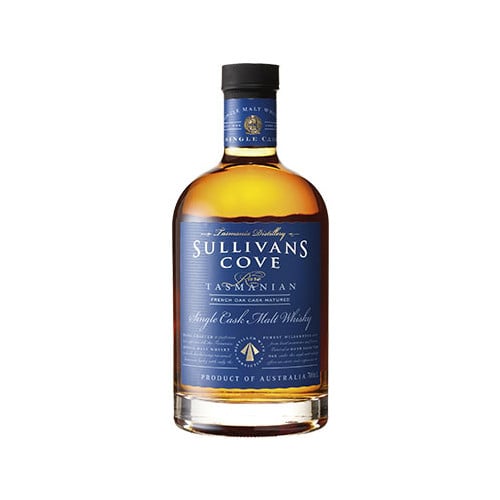 Situated along the banks of the River Derwent on the island of Tasmania, Sullivans Cove was the site of one of Britain's first penal colonies in Australia. In 1804, at the order of the Governor King of the British settlement of New South Wales, Lt. John Bowen transported some of the most heinous British criminals to Sullivans Cove, which eventually developed into the city of Hobart. Hobart was the perfect penal colony — the area's dense forests required a huge labor force in order to establish a settlement, and its isolation and inaccessibility ensured there was no escape. Today, the island of Tasmania remains of one the most isolated and natural places on earth — approximately 37% of the island is protected as natural reserves.

Sullivans Cove French Oak Single Cask Malt Whisky is made from barley grown exclusively on the island of Tasmania. "The island's deep red basalt soil, pure water and mild temperatures result in a barley that is perfect for distillation," says Patrick Maguire, the distillery's founder and master distiller (his ancestors were convicts that were imprisoned on the island). In addition, the island has one of the oldest and strictest quarantine programs in the world, ensuring that the barley remains untainted.

Once the barley has been harvested, it is malted at the Cascade Brewery by Roger Ibbott, who has over four decades of experience malting barley. The malted barley is then mashed and fermented at Sullivans Cove Distillery using a unique strain of yeast developed specifically for the production of Sullivans Cove Whisky. Then, the wash is twice-distilled through a handmade copper-pot still. "The real trick is to cut the run short, so that only the sweetest, best flavors and purest alcohol from the heart of the run is captured", says Macguire. It's not the most sensible approach by an accountant's standards, but then it's a good thing that we are not accountants!"

Following distillation, Sullivans Cove French Oak Single Cask Malt Whisky is matured for twelve years in hand-selected, thirty-year old French oak casks that were previously used to mature port. As a result, the whisky has a lush, floral aroma with notes of chocolate, cherries, dried fruits and toffee, which lead to a supple, dark finish.

Sullivans Cove French Oak earned the Gold Medal at the World Whisky Masters, and also earned a score of 96.5 points in Jim Murray's Whisky Bible. In addition, the whisky was named the "World's Best Single Malt Whisky" by Whisky Magazine in 2014.

"This whisky is distilled with conviction,"Macguire says. Pick up a unique single malt today!