Size750mL Proof95 (47.5% ABV)
The finest showcase of the Tasmanian Sullivan's Cove Distillery and master distiller Patrick Maguire's favorite expression, this award-winning whisky spends around 13 years in ex-bourbon casks.
Notify me when this product is back in stock. 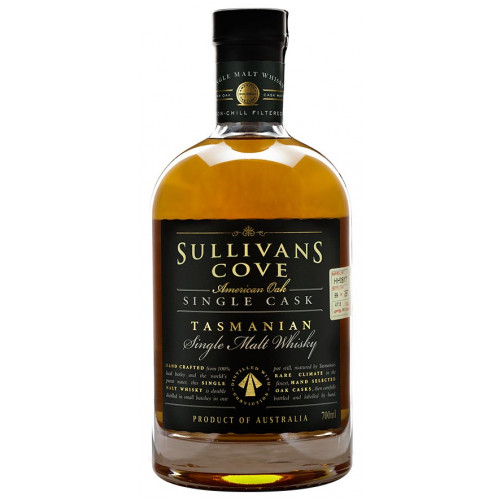 Situated along the banks of the River Derwent on the island of Tasmania, Sullivans Cove was the site of one of Britain's first penal colonies in Australia. In 1804, at the order of the Governor King of the British settlement of New South Wales, Lt. John Bowen transported some of the most heinous British criminals to Sullivans Cove, which eventually developed into the city of Hobart. Hobart was the perfect penal colony — the area's dense forests required a huge labor force in order to establish a settlement, and its isolation and inaccessibility ensured there was no escape. Today, the island of Tasmania remains one of the most isolated and natural places on earth — approximately 37% of the island is protected as natural reserves.

Once the barley has been harvested, it is malted at the Cascade Brewery by Roger Ibbott, who has over four decades of experience malting barley. The malted barley is then mashed and fermented at Sullivans Cove Distillery using a unique strain of yeast developed specifically for the production of Sullivans Cove Whisky. Then, the wash is distilled twice through a handmade copper-pot still. "The real trick is to cut the run short, so that only the sweetest, best flavors and purest alcohol from the heart of the run is captured", says Macguire. "It's not the most sensible approach by an accountant's standards, but then it's a good thing that we are not accountants!"

Their American Oak Single Cask is master distiller Patrick Maguire's favorite expression and the one in their lineup to have garnered the most accolades over the years. The first Australian whisky to achieve a Liquid Gold Award in Jim Murray's Whisky Bible, this spirit spends around 13 years in ex-bourbon casks (it's done when it's done!), before being bottled at 95 proof. It's a great showcase of the style of the distillery with its rich and creamy profile that has plenty of vanilla, caramel, and fruit notes.

It's an exceptionally well-balanced profile with vanilla, intense malt, wood, and floral notes on the nose. The palate has an earthiness to it with caramel, honey, pound cake, and apricot. Finishes with lasting oak and malt.