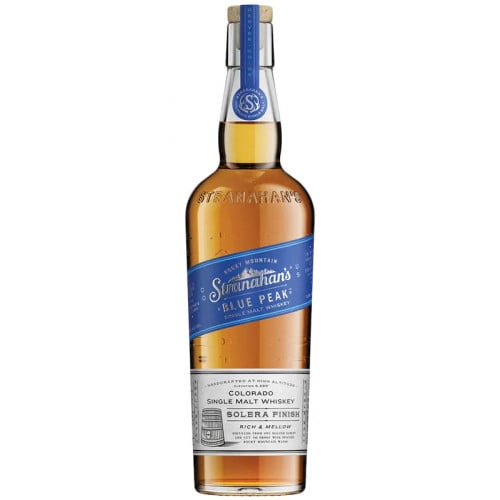 Bringing together tradition and innovation, Stranahan’s Blue Peak Single Malt Whiskey is an American single malt, distilled at a high altitude. Matured for 4 years in new, 53-gallon American oak casks and Solera finished, the result is a rich and mellow whiskey with warm, toasted notes mingling with fruit and butterscotch. Named after a 13-thousand-foot peak in Aspen, this is a small batch single malt whiskey. Cut to proof with Rocky Mountain water, it's bottled at 86 proof. Enjoy neat, on the rocks, or in a cocktail.

After the whiskey has matured for a minimum of two years (the final whiskey is crafted from a blend of two, three and five year old whiskeys), it is brought to proof with water sourced from the Eldorado spring, situated just outside Boulder, Colorado. Then, each batch is bottled by hand.

Greeting with apricot, honey, and toasted oak on the nose, the palate is rich and mellow with warm, toasted notes mingling with fruit and butterscotch. The finish brings some vanilla, apples, and herbal flavors.