Size750mL Proof96 (48% ABV)
Crafted exclusively from locally-sourced floor malted rye and barley, Stauning Rye Danish Whisky is double distilled in open-fired stills, resulting in complex and deep flavors of dried fruit, peppery oak, and ripe cherry.
Notify me when this product is back in stock. 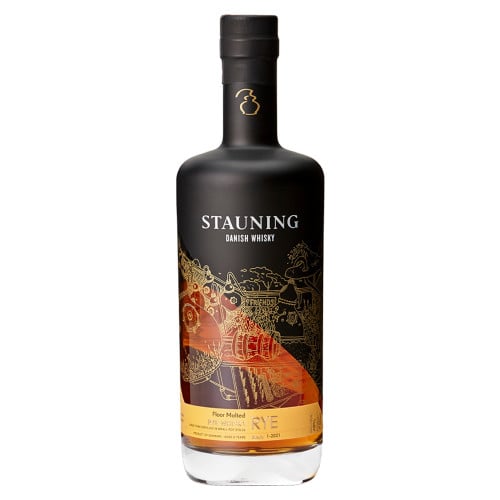 Crafted exclusively from floor malted rye and barley, Stauning Rye Danish Whisky is double distilled in open-fired stills, resulting in complex and deep flavors. Aged in new American oak barrels and not chill-filtered, it greets with rye bread, wine gums, and a hint of pepper on the nose while the gentle palate delivers dried fruit, peppery oak, and ripe cherry together with vanilla and citrus peels. Expect a fruity and sweet finish.

Founded in 2009 by nine friends – a doctor, a butcher, a teacher, a helicopter pilot and four engineers – Stauning Whisky came to be in an old butchery in a remote village on the West Coast of Denmark. At the beginning, they didn't have much except shared passion, two small pot stills and the beautiful nature surrounding them, including the heather, the finest Danish water, and the peat. Creating a 100% Danish whisky, "they had to make our whisky with what grew around us," says Lasse, one of the founders. "The same applied to the engineering. We just used and adapted what was lying around, saw what we could replicate from a normal distillery, and then fine-tune".

Even after their passion project took off and they were able to afford the best equipment available, the secret behind their award-winning New Nordic terroir whisky remained the same: locally grown rye and barley, small fire-heated pot stills, and floor malting.

The nose greets with rye bread, wine gums, and a hint of pepper, while the gentle palate delivers dried fruit, peppery oak, and ripe cherry together with vanilla and citrus peels. Expect a fruity and sweet finish.